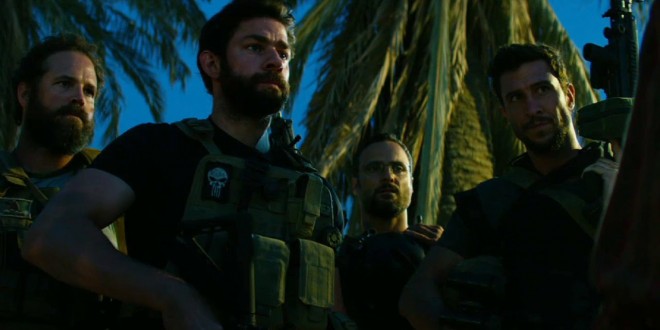 13 HOURS: THE SECRET SOLDIERS OF BENGHAZI

Knowing the outcome of this disastrous debacle in no way diminishes the intensity of Michael Bay’s film based on the book (“13 Hours: the Inside Account of What Really Happened in Benghazi”) by Mitchell Zuckoff; sensationalized depiction of the days leading up to September 11, 2012, in little-known Benghazi, Libya.

Driving through the circuitous, dusty streets the soldiers are met with palatable hatred by the citizens, longing to be rid of the unwanted interlopers, “settlers”. Ultimately successful, with deaths of four Americans, including Ambassador J. Christopher Stevens (politically-perfect, Matt Letscher); almost four years later the gauzy, warped suppositions, tenaciously taunt the US government, politicians; spewing obfuscations, platitudinous jargon in an attempt to cloak their ineptitude with jejune reason. America’s villainess role is highlighted, never excused in the pulsating, gut-wrenching scenario.

Bay infuses “13 Hours” with the mythology of writer/lecturer Joseph Campbell (1904-1987); quoting twice from “The Power of Myth”: “the demon that you can swallow gives you its power…..; heaven and hell are within us, and all the gods are within us.” “13 Hours” unites the feverish, cacophonous, hellish battleground with the steadfastness and purity of the mission-driven soldiers.

Campbell also believed that “the seat of the soul is there, where the inner and outer worlds meet”. “13 Hours” leaves one ruminating on the status of the world in general and its blighted soullessness.