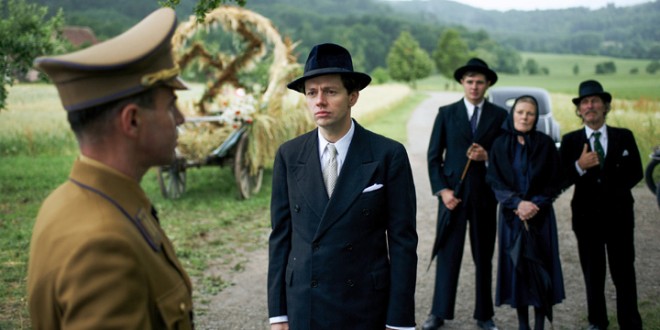 Recently, German films have brazenly analyzed their bleak accountability for WWII; “Labyrinth of Lies” (2014) was outstanding and “13 Minutes” directed by Oliver Hirschbiegel should be seen for a myriad of reasons: cinematography tightly, pristinely anchors the viewers attention to the plot; the acting is superb: Christian Friedel is haunting as young Georg Elser, an apolitical carpenter who devises a bomb to annihilate Adolf Hitler on November 8th, 1939 (missing his target by thirteen minutes); Katerina Schuttler is waif-like and beautiful as Georg’s passion, Elsa; particularly riveting are Burghart Klaussner and Johann Von Bulow as Georg’s Nazi interrogators. The story itself burns with intensity; watching a young, rousting boy, flirting outrageously, singing in a band; he is a metaphor for the common man, reinvented, but the same through centuries, we know him, like him, not for his remarkability, but for his gentle, benign characteristics; unimaginable, is the well-concealed mettle simmering beneath the placid surface.

“13 Minutes” brings to the fore a man whose badge of courage lay dormant over seventy years; Georg Elser’s indomitable will should be applauded and memorialized; his dignity and integrity challenged the maniacal norm; temporarily entombed; now in 2017 rising from anonymity, claiming his place in the league of the righteous.