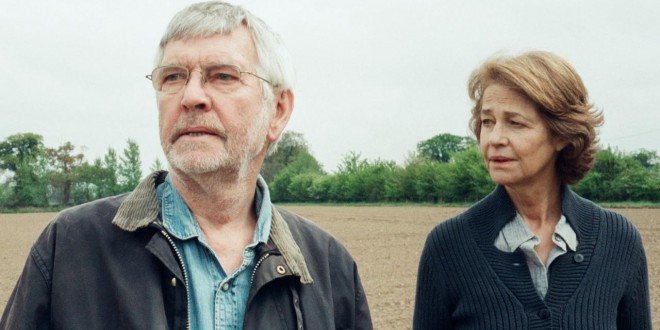 Charlotte Rampling and Tom Courtenay give subtle,  profound performances as a retired couple on the verge of their forty-fifth wedding anniversary. Directed by Andrew Haigh, based on a 10-page story by David Constantine, this quietly brilliant psychological scenario will haunt one long after its initial viewing. After two screenings I am still unsettled, pondering, contemplating the conclusion.

“Geoff” (Courtenay) receives a letter notifying him that the body of a former love “Katya” has been discovered after 50 years of entombment, in a glacier in Switzerland; “Kate” (Rampling)  ignorant of Katya’s existence, now faced with this ageless, precious spectre who informed her husband’s life a half century earlier. Rampling brings to the fore her inimitable deftness as an actor; Kate sleuths into the past, uncovers remnants of a relationship, kept alive by memories; fissures occur, emotional trauma, severe hubris transforms her days as she plans the anniversary celebration.

Geoff also navigates his inner core; shock of discovery precipitously shunts him back to his youth, intense passion cauterized by a single catastrophic moment.

The film’s enthralling potency lies in its anomalies; succinctly subjective, every viewer brings their own unique history, perspective to the narrative. The outcome, exquisite fodder for film studies, well into the twenty-first century and beyond.