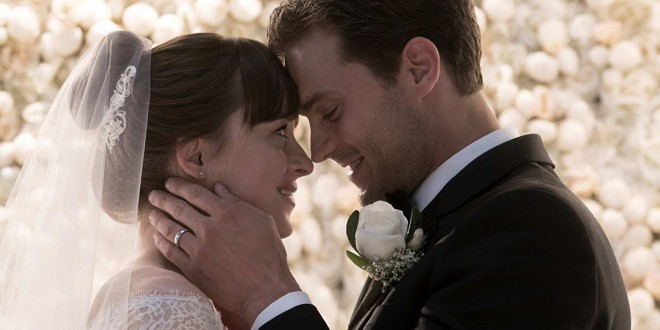 EL James successfully capitalized on sexual titillation that has been practiced by archival cultures for eons: India’s “Kama Sutra”, China’s Taoist texts during the Han Dynasty, even Confucius had opinions on the “joining of the essences”;  author James Clavell in novels “Shogun” and “Tai- Pan” gives a more contemporary twist in Eastern “pleasing pleasures”; these civilizations considered “coupling” as an art form; a visit to the Indian city of Khajuraho, built between 900-1130 AD solidifies the point.

Director James Foley, completed the exhaustive trilogy, with as much electrification that stars Dakota Johnson (“Anastasia Steele”) and Jamie Dornan (“Christian Grey”) could generate, which unfortunately, lacked the voltage to keep viewers stimulated. The nasty naughtiness is stale and repetitive, being married diminishes the pungent, prurient element; cloying dialogue, interlaced with placid giggling, “Mr.Grey’s” and “Mrs. Grey’s” is jejune and uncomfortably irritating.

In its defense, the film is luscious to look at, due to cinematographer John Schwartzman; a travelogue, a window into the world of the wealthy, famous and infamous.

The only character not shrouded in superficiality is the mendicant “Jack Hyde” (sickeningly sensational Eric Johnson) Anastasia’s ex-boss and would be lover; his decadent genius plays havoc with the personal and professional Grey empire; his hubris is the only ingredient that piques and challenges one’s interest.