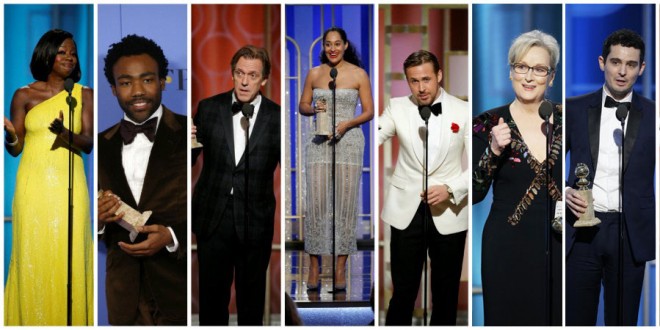 Acceptance awards by the winners were gracious, heartfelt and in some cases inspirational: Viola Davis wins the highest plaudits for her stunning, humble acknowledgment of her win as the Best Supporting Actress (“Fences”); Ryan Gosling’s (Best Actor Comedy/Musical) tribute to his wife, who encouraged his filming of “La La Land” while caring for their daughters and an ailing brother; thirty-one-year-old Damien Chazelle (he could have stayed on the stage) for his copious globes for “La La Land”.

The most outstanding presenter was Viola Davis; her poetic, luminous portrait of Meryl Streep’s eminent film career ranks as the finest I have ever heard; comfortable in the oratory sphere of Emma Goldman, Clarence Darrow, Winston Churchill, Nelson Mandela, Mahatma Gandhi, she captured the wisdom, intelligence, overwhelming empathy and understanding Ms. Streep imbues in all her characterizations.

Streep’s eloquent acceptance of the Cecil B. DeMille Lifetime Achievement Award, had little to do with her life on the screen; in a different arena, I would vote for her.

The highlight (after Ms. Davis) was the positively, perfectly performed presentation by Kristen Wiig and Steve Carell of the Best Animated Film (“Zootopia”); their first experience in viewing an animated film was memorable because of the tragedies it ignited; here were actors, doing what we pay them for: entertain and offer an escape from a contentious world; they remained in character, balancing levity and hilarity.

A FOUR STAR evening remembered for its lack of boredom!