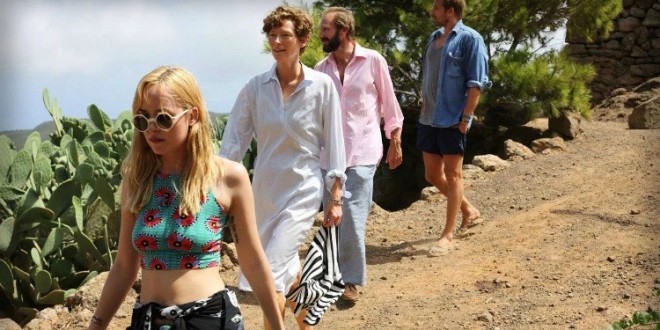 Revisiting the stunning 1969 “La Piscine” directed by Jacques Deray or 2003’s  “The Swimming Pool” directed by Francois Ozon and starring the inimitable Charlotte Rampling; this version unfortunately does not have the energy and potency of a “bigger splash”.

Director Luca Guadagnino (“I Am Love”, classic favorite of mine) captures the luscious, sensual appeal of sizzling, sun-poached days, dusty, wind-fractured moments, and at its core a swimming pool, a harbinger of what is to come.   The soundtrack, featuring “The Rolling Stones”, “Robert Mitchum”, “Chrisma” is sensational and adds scintillating volumes to the narrative.

Pungent ingredients of jealousy, insecurity, lust (symbolized by the snake, ultimate metaphor for the demise of the “Garden of Eden”) all meticulously woven by Guadagnino into the predictable scenario.

2016-05-15
Peneflix Admin
Share !
Previous: MONEY MONSTER
Next: HIGH-RISE (ON DEMAND AND IN THEATRES)