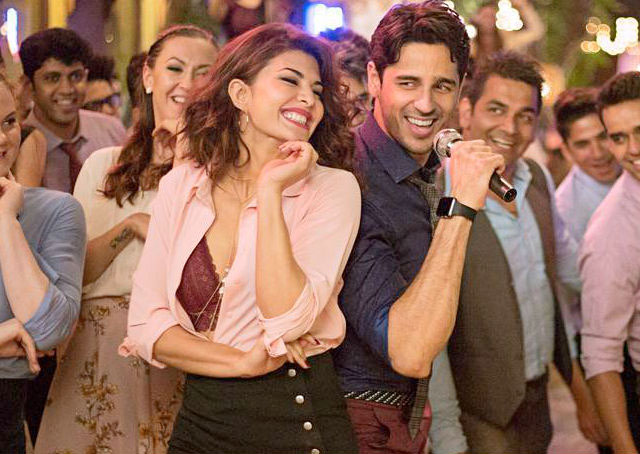 Predictability can be totally refreshing especially with the “dog” films of summer; watching “A Gentleman”, tumultuous reality, gritty politics and crime were suspended in favor of a raucous romp through Miami, Mumbai and Goa; gorgeously-paired Sidharth Malhotra and Jacqueline Fernandez, destined to bond, flirt, sing and dance, creating a sugary confection of romance and intrigue, ubiquitous on the Bollywood screen.

“Gaurav”/”Rishi” (Malhorta), is a benign sweetheart,  living the “American” dream, working respectably as Guarav; the flip side as Rishi, he “leaps tall buildings in a single bound”, steals hard-drives, rocks as a superman, with dazzling, toned abs; Malhorta imbues style and panache  to each role. Fernandez is stunning as “Kavya”, believable as a desirable woman graced with grit, intelligence and charm. Both mesmerize in Sachin-Jigar’s  musical score; always amazes the miraculous depth of talent exhibited by Indian actors; god-given looks, sensational voices, balletic acuity, a massive range of acting nimbleness; Western audiences are on the cusp of grasping the mammoth scale of their inimitable talents.

“A Gentleman” soars with Roman Jacobi ‘s sublime cinematography, direction by Krishna D. K. and Raj Nidimoru, and actors that defy you to look away; simply, a first-class example of what a film should ascend to,

a momentary eclipse from daily travails.

2017-08-28
Peneflix Admin
Share !
Previous: THE TRIP TO SPAIN ON DEMAND AND IN THEATRES
Next: GOOD TIME