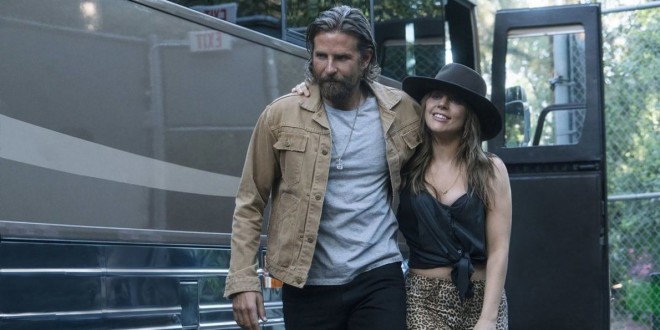 A STAR IS BORN

Rising, in Phoenix tradition, the fourth, and pivotally realistic, version of a star-crossed, fatefully doomed, relationship; refreshingly compelling, due to the magnetism of its stars; Bradley Cooper and Lady Gaga are daunting as “Jackson Maine” and “Ally Campana”; they flirt with the iconic greatness of 1954’s version directed by George Cukor, starring Judy Garland and James Mason, transcending the predictable scenario, creating a twenty-first century narrative. This is Cooper’s “love child”, his role is ubiquitous: co-writer, director, producer, and star; his bibulous portrayal of a man intentionally inducing self-annihilation is remarkably tender; sickened by his catastrophic descent into an Inferno, a netherworld, informed by the ghost of his alcoholic father; defenseless, incapable of veering away from his path to perdition. His pathetically poignant performance, instead of repelling, garnishes empathy from viewers. A scene with his much older brother “Bobby” (triumphant depiction by Sam Elliot) is the immediate insight into the family’s beleaguered, painful history.

Lady Gaga, in her acting debut, is astonishing; her tattooed, manufactured persona erased in favor of naturalness; excoriated artificiality, replaced by masterful, adroit talent; her honest, unfeigned portrayal as a woman, serendipitously, given an opportunity to soar, wholeheartedly embraces it along with its vicissitudes and glories; her ambition matched succinctly with Jack’s dissipation. Jack, rarely sober, performs adequately before adulating crowds, thoroughly wasted, in his first scene (Cooper’s voice is refined), his addiction, exponentially exacerbated, leads him to a drag bar, where Ally magnificently sings Edith Piaf’s “La Vie en Rose”; thus commences, their tragically profound, love story. A love so consummate, impregnable, no force can pulverize it.

“A Star is Born” resonates with destructiveness, insecurities, deep-seated unwillingness to shed the presumed injustices of one’s birthright, for a favored position in the limelight, balanced with the majesty of success; recognition by the majority of one’s peers, handling the fame and glorification with aplomb, humility, and grace.

2018-10-06
Peneflix Admin
Share !
Previous: PENEFLIX IS ON A TWO WEEK SABBATICAL
Next: COLETTE