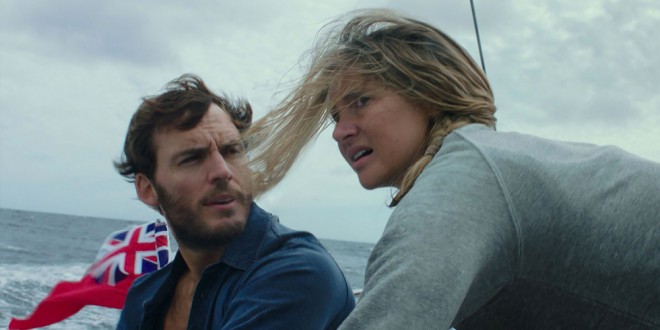 Icelandic director Baltasar Kormakur (2012,”The Deep”) uses his knowledge and respect for nature’s unpredictable temperament to relive, on screen, Tami Oldman’s ultimate tale of besting nature at its own game. In 1983 Tami and her English boyfriend, Richard Sharpe, are commissioned to sail a friend’s yacht from Tahiti to San Diego; Hurricane Raymond waylays their plans, hence this remarkable test of human endurance, inimitable fortitude, and skill by a twenty-four-year-old woman.

Shailene Woodley (also a producer) gives a prescient, gifted depiction of Tami; totally believable as a sailor who has mastered nautical adroitness, celestial navigational tools, and an indomitable will to survive.

Sam Claflin (even a scruffy beard cannot conceal his handsomeness) as a prone, wounded Richard struggles, to bestow dignity on a mate, wholly dependent on the woman he loves.

There are a myriad of films focusing on the intimacy of man’s unwilling war against cosmos’s capriciousness: “Cast Away”, “Open Water”, “Perfect Storm”, “Life of Pi”, all dependent on the success of the cinematography. “Adrift’s” cinematographer, Richard Sharpe, with brilliance, captures the intensity, luminosity and terrifying effects of Poseidon’s quest for dominance over man’s trespassing on its turf.

2018-06-02
Peneflix Admin
Share !
Previous: ON CHESIL BEACH
Next: THE GOSPEL ACCORDING TO ANDRE