Latest Reviews
Home » Hollywood » ALL THE MONEY IN THE WORLD 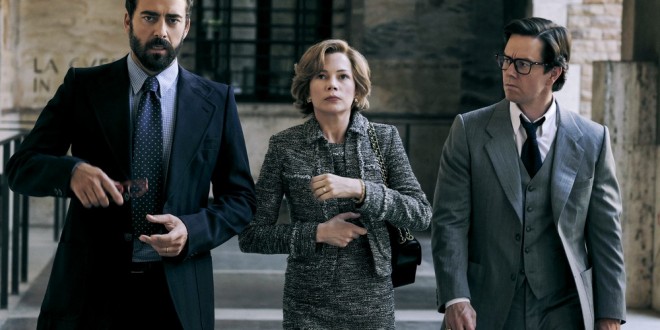 (l to r) Andrea Piedimonte Bodini, Michelle Williams and Mark Wahlberg in TriStar Pictures' ALL THE MONEY IN THE WORLD.

Ridley Scott’s biopic, revolving around the 1973 kidnapping of J. Paul Getty’s (1892-1976) grandson, sixteen-year-old, high school dropout, J. Paul III, seethes with the despicability of an amoral man, whose zealous quest for wealth consumed any human decency, that should have led to philanthropy, but instead to egregious greed and Olympian, myopic, insensitivity, heartlessness. In the 70’s Getty’s oil empire (and its unctuous, slimy molecular compound) was worth approximately two billion dollars. Christopher Plummer (replaced the disgraced Kevin Spacey) with dexterous style, embracing Getty’s avaricious craving for money, possessions, and in particular his scorched, emotional infirmities.

The movie is owned and triumphed by Michelle Williams, with grit and mettle, she portrays Gail Getty, mother of kidnapped Paul (Charlie Plummer, no relation to Christopher) with poise, depth and painful empathy, a woman of superior character, over the five month period of her son’s degradation; divorced from drug-addled Paul, Jr., having sought no monetary compensation from the family, she implores her ex father-in-law to pay the ransom; his intractability, megalomania supersede reason; she is aided by Getty’s security specialist, Fletcher Chase (Mark Wahlberg in a benign but perceptive role); ultimately, after negotiating a reduced ransom (Getty wanted to use his grandson’s abduction and retrieval as a tax deduction), satisfaction was attained.

Of the “Italian” kidnappers (Paul was abducted in Rome), Cinquanta (depicted by superb French actor Romani Duris, “Ansene Lupin”) is attributed with saving his life.

In reality, I did not care for the film (not withstanding fine acting) and anxiously awaited its conclusion; there is an uncleanliness,  a complete lack of conscience or accountability permeating every scene; most of the protagonists futures ended bleakly, lives swallowed by drugs, alcohol and nothingness; in possession of “all the money in the world” led to  contemptible, miserly misery.