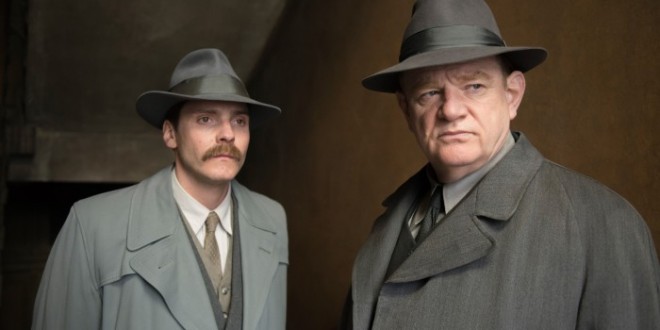 ALONE IN BERLIN (ON DEMAND & IN THEATRES)

Loosely based on a traumatized German couple, Otto and Elise Hampel, who dually wage their solitary crusade against Hitler and the Nazi regime; referencing Hans Fallada’s 1947 novel, “Everyone Dies Alone”, his source culled from Gestapo files after the war; director Vincent Perez with actors Brendan Gleeson, Emma Thompson and Daniel Bruhl quietly and at times blandly, but ultimately compelling, shed meaning on the power of “two” to affect the masses.

“Otto and Anna Quangel” after the senseless loss of their only child, “Hans” in 1940, cope with his devastating absence by distributing postcards, written painstakingly by Otto, casting shame and blame on the egregious, amoral behavior of Adolf Hitler and the sycophants who worshiped him. Brendan Gleeson imbues his roles with inimitable strength and dignity,  wordlessly conveys his resolve, as he fearlessly flirts with extinction, if captured; Emma Thompson’s fragility as wounded Anna, melts into dogged persistence as she and Otto randomly circulate the postcards throughout the beautifully lit city of Berlin.

Daniel Bruhl, after his performance as Niki Lauda in “Rush” is a force to behold, appreciate and follow. As detective  “Escherich”, in charge of finding the postcard perpetrators; subtlety balancing the parameters of his position, cruelty and determination with an underlying streak of humanity. His complexity erases the obvious predictability of the scenario.

“Alone in Berlin” is an intriguing story, in contrast to ubiquitous, gut-wrenching Holocaust themes; focusing on a middle class, devoted couple, coping with grief, using pen and paper, simple tools, but effective in securing a legacy far beyond their wildest expectations.