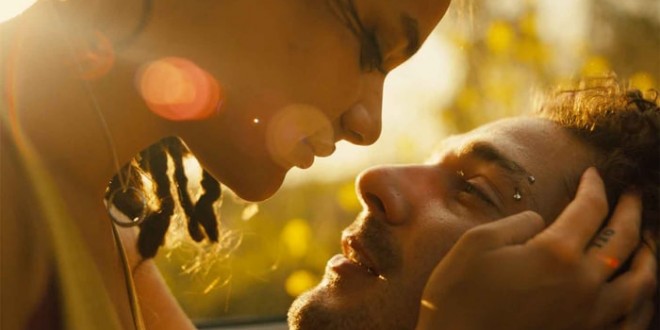 Director Andrea Arnold’s (“Fish Tank”) “American Honey” is rough, gritty, ugly, disturbing and at times profoundly poetic, and I did not care for it. Puzzling when greatness dazzles and your natural instinct is to turn away.

“Star” (sharp and poignant depiction by Sasha Lane) is eighteen, caring for two children,(there is a vagueness as to their bond, familial or otherwise) foraging for food in a dumpster, behind a  restaurant, when she encounters and is bamboozled by “Jake” (Shia LaBeouf’s conquers the charismatic, enigmatic salesman); he offers her a job selling magazine subscriptions and introducers her to “Krystal” (Riley Keough) a boozy, tattooed entrepreneur who runs her vagabond group with  a steely will; first time actors, given tremendous latitude, score with their legitimate and often autobiographical performances.

Referred to as a “coming of age film” doesn’t suit the scenario; so many of these young people were aged at conception; spawned from indigents, drug-addled parasites, they are accidents, victims of unaccountability and neglect, even the positive, as in Star’s case, has been erased.

Arnold forces viewers (hand held camera technique, lends unwanted intimacy to the saga) to study the world, very much in existence, of young, disenfranchised, misfits; their copious tattoos are diaries of their woes; unlimited alcohol and drugs inform their days leading to wild parties and confrontations in the evenings.

There is much to admire in “American Honey”; Star’s journey across the country is met with the “kindness of strangers”; she’s in charge of her choices, never victimized as she tries to earn her passage to financial freedom and actualizing her dream of owning a trailer and procreating.

It was not Arnold’s intent to make an “easy” film and she succeeds; instinctively most shun these uninhibited creatures, let alone invite into one’s home; she purposefully destroys categorization, awakens the realization that these individuals share our sphere, should be recognized and understood.

No, I did not like “American Honey” but I do not regret seeing.

2016-10-14
Peneflix Admin
Share !
Previous: THE BIRTH OF A NATION
Next: CHICAGO INTERNATIONAL FILM FESTIVAL: WHAT TO SEE AFTER DAY THREE