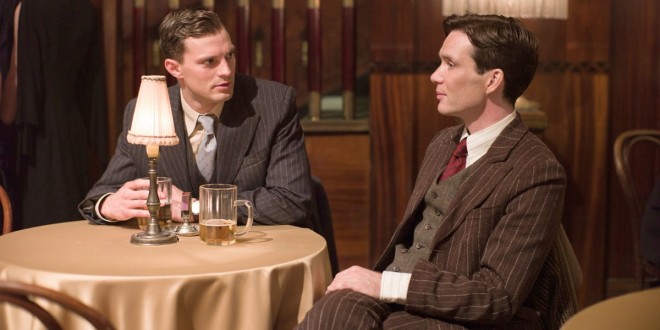 Reinhard Heydrich (1904-1942), aka the “Butcher of Prague”, architect of Hitler’s Final Solution was assassinated by Czech resistance fighters on June 4th, 1942. Director Sean Ellis personifies the seven courageous parachutists who willingly sacrificed their lives to fulfill their ambitious, bleak mission.

Focusing on Jozef Gabcik (intensely, efficaciously portrayed by Cillian Murphy: “Breakfast on Pluto”, “Wind that Shakes the Barley”) and Jan Kubis (Jamie Dornan of “Fifty Shades of Grey”, is magnificent as the sensitive man fated to expunge the world of a diabolical fiend); exceptionally filmed, Ellis, at times to offset the inevitable circumstances,  romanticizes their stories, by including “Marie” (lovely Charlotte Le Bon) as Jan’s lover and “Lenka” (hypnotic Czech actor, Anna Geislerova) Jozef’s mutual attraction; doomed inevitability informs every scene. Ellis raises to the fore ordinary Czech citizens who sacrificed their futures to aid and hide the ill-starred, young warriors; extraordinary times creates heroes of unlikely individuals, we’re introduced to them in “Anthropoid”  (the code name of the operation. The word references apes that resemble human beings; irony, does not escape the viewer.)

The final footage, a thrilling siege in a church where the soldiers are hiding, pulsates with astounding camera work, highlighting the ingenuity, fearlessness, intrepidness of seven men against the German army; stunning example of audacious valor, stoutheartedness when confronted with finality.

Hitler’s demonic revenge for the killing of Heydrich was the annihilation of the town of Lidice; 340 men executed; 88 women and children relocated to concentration camps. This was the human price for saving the extermination of thousands more at the barbaric will of Reinhard Heydrich.