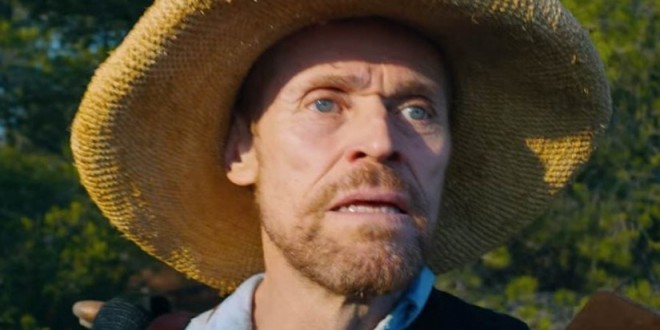 “Loving Vincent” last year’s sensationally thrilling, animated rendition of Vincent van Gogh’s (1853-1890) final days, tipped the scales in technological wizardry; artist/director Julian Schnabel (“Basquiat”, “The Diving Bell and the Butterfly”, “Before Night Falls”) in “At Eternity’s Gate” brilliantly, presciently focuses on the effects of religious fervor on Van Gogh’s artistic prodigiousness; son of a Lutheran pastor Vincent was a missionary in a coal mining town, until disillusionment led to his dismissal; but Christianity’s God informs the totality of his pantheistic spirituality; vibrant blue, references God’s presence, yellow, His love. Willem Dafoe, at sixty-three, is riveting as the tortured, misunderstood savant; palatable is the wretched agony loneliness foisted on his psyche, versus the fervency of his copious output; speed was his aphrodisiac, alacrity his mantra. His disputes with his fellow painter Paul Gauguin (1848-1903), (indomitable, Oscar Isaac) precipitated Gauguin’s exit from their art-nest in Arles, France; possibly the legitimate reason for Vincent’s lacerated ear.

The film’s core resonates with letters Vincent sent to his younger brother, Theo (1857-1891); Rupert Friend gives an empathetically grand performance; their scene in the asylum, after one of Vincent’s episodes is painfully poignant and lovingly, achingly crafted.

The musical score by Tatiana Lisovkaia, partnered with Benoit Delhomme’s cinematography is poetic perfection, a graceful complement to Vincent’s manic state; myth heralds that he sucked on his lead-laced paint brushes, leading to a poisoned brain, depression and ultimate demise. His life span of thirty-seven years, can be summarized in his own words: “I put my heart and soul into my work and have lost my mind in the process.”

2018-11-22
Peneflix Admin
Share !
Previous: THE FRONT RUNNER
Next: THE BALLAD OF BUSTER SCRUGGS NETFLIX & IN THEATRES