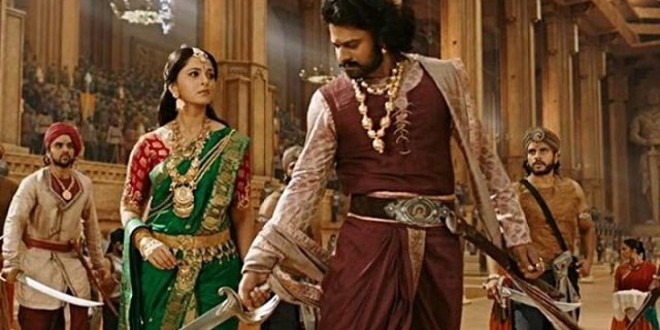 It is rare when a Bollywood film lands in the top ten viewed flicks in the Western World; “Baahubali 2” is the highest grossing Indian film ever (the price of admission exceeds the norm) made. Is it worth the time (3 hours) and added expense? If you’re a fan of the spectacular, absolutely.

The Indus Valley Civilization traces its origins to approximately 4300 BC; The Mahabharata (500 BC) a Sanskrit epic focusing on the travails of the Bharata dynasty, containing the Bhagavad-Gita, in its over 50,000 lines; like Greek and Roman mythology, Hindu lore has constant interaction between gods and men; the god Krishna, one of Vishnu’s many avatars, is Arjuna’s charioteer, and with the most compelling, compassionate reasoning unshackles his dilemma of battling and killing his cousins; philosophy, karma, dharma resonate at the core of the Bhagavad-Gita. “Baahubali 2” is imbued and stuns with India’s ancient myths.

Your historical knowledge of mythology, Hinduism is of little consequence; the entire film is a morality play, a metaphor for the differentiation between radiant righteousness and extraordinary evil: a queen mother, tricked into robbing the rightful heir to the throne (Rebecca-style) gifting the crown to the tainted “seed”; good-hearted Baahubali and his brother Bhallala, (like Shakespeare’s “Richard III” will resort to the lowest diabolical level to satisfy his ambitions); “Cain and Abel” references seethe beneath Bhallala’s duplicity.

“Baahubali 2: The Conclusion” resonates with all audiences, regardless of where they reside on the globe.