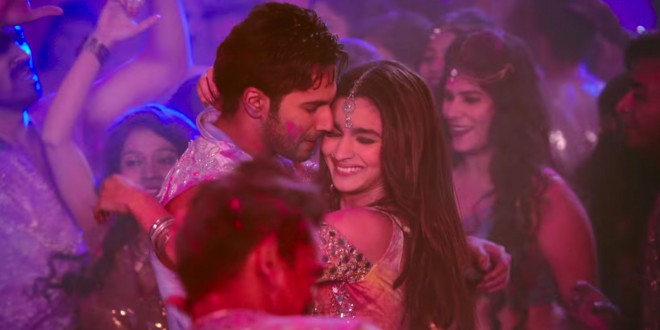 Dimpled Alia Bhatt (“Vaidehi”) has matured in stature, encompassing the inimitable talents of her parents, Soni Razdan and Mahesh Bhatt; “Highway”, “Kapoor & Sons”, “Dear Zindagi” and now as the “Bride” of “Badri” (Varun Bhawan) she soars as a confident woman, controlling her own destiny. Director Shashank Khaitan reunites Bhatt and Bhawan after 2014’s successful “Humpty Sharma Ki Dulhania”. In strict “Bollywood” mode there is an instant pheromone connection, scintillating dance numbers, myriad of costumes, motorcycle jaunts all leading to the inevitable match. But “Badrinath Ki Dulhania” takes an ambitious detour and addresses India’s patriarchal society: fathers’ quest for the appropriate bride/groom for their progeny; a “dowry deal” before the astronomical marriage date is set; children are expected to give full, unequivocal loyalty, accepting, unquestioning parental choices.

“Badri” who is a lovable wastrel; running around with his friend, a wedding arranger; his tyrannical father is a money lender (Badri collects the debts) and his older brother, adjusting to his arranged marriage, runs a car dealership. Badri feels his charms are enough to attract any woman but Vaidehi has other ideas.

Both protagonists mature, recognizing, compromising, and respecting their disparate capabilities; unfortunately, the film stumbles as Badri finds solace in alcohol; his pivotal confrontation with his intransigent father had to be exercised, infused with liquid courage.