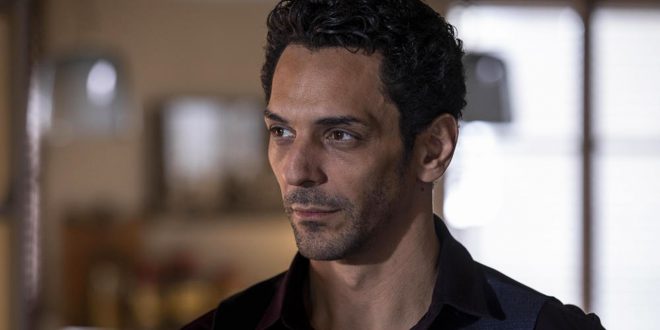 Never have I grieved more for a fictional character than at the bleak conclusion of “Baltazar’s” third season; other protagonists have sequestered permanent residency in my memory vault: House, Foyle, Morse but none possess the illumination,  compelling endearment, concrete charm of “Raphael Balthazar”; Tomer Sisley’s Herculean portrait of the forensic pathologist is slathered in cunning, inimitable style, grace, insouciant nonchalance; he is impossible to insult and more than impossible, not to love. I am euphoric to report the fourth season carries the guarantee of matching or surpassing the previous three. Hiding from his nightmarish, pregnant, interred wife “Maya” (singularly, sensationally evil Leslie Medina), in perpetual conversation with his dead wife/girlfriend, “Lise” (caustic, tattooed Pauline Cheviller); with harrowing aplomb, accompanied by newcomer, Constance Labbe as police officer “Camille Costes” engaging in “Taming of the Shrew” repartee, energizing the gap created by the missing detective “Helene Bach” (irreplaceable Helene de Fougerolles). With striking originality writers Clothilde Jamin and Clelia Constantine imbue the series with story lines, mystifying, even the most discerning of sleuths.

India deserves reverence for its lionization of its heroes; from battlefields to sports arenas lionhearted champions rise above the fray, conquering hearts and minds regardless of caste, creed, gender; Arjun Talwar, at thirty-six returns to cricket; actor Shahid Kapoor, does justice to a man who, without the game is listless, melancholic, uninspired; his rocky marriage to Vidya (Mrunal Thakur) is as lifeless as his laconic days; returning to the game and stunning the populace as being the greatest “right-handed batter” of all time was spurred by his seven-year-old son, Ketan (child prodigy, Ronit Kamra); at almost three hours, struggling with clichéd melancholy, mannered sensationalism, manages to heft “Jersey” into a sphere of approbation for a man, despite the odds, who made history,