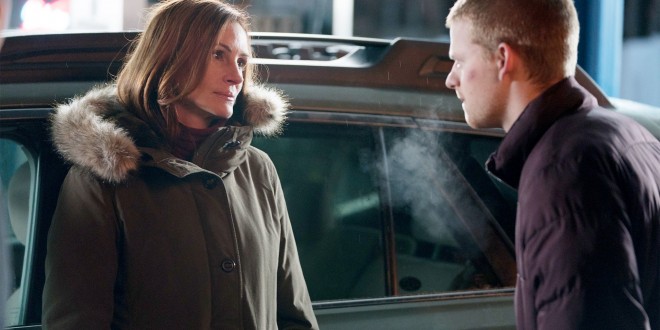 Rarely will you see a mother/son relationship, so profoundly depicted, magnificently perfected, defined by the acting acuity of thespians Julia Roberts and Lucas Hedges (“Ben and Holly Burns”); their palatable, heart-wrenching love is the core of this exceedingly real scenario; its fictional tale, resonates as truth in today’s drug- infested environment; millions of families have been annihilated by the egregious toxicity of illegal drugs and abused pharmaceuticals;  written and directed by Peter Hedges (Lucas’ father), unlike the pain audiences were subjected to in “Beautiful Boy”,  we never see Ben “high” or “stoned”, imaginative facilities easily conger the ghastly effects of substances’ destructive potency; “Ben is Back” is a twenty-four hour journey and penetrating test of a mother’s will, at any cost, to salvage her son.

We meet Ben, reprieved from his rehab center, surprising his family for the holidays; dynamics instantly altered; trust has been eradicated, his half siblings are overjoyed at his appearance; his sister, “Ivy” (Kathryn Newton) instantly suspicious, and his stepfather “Neal” (miscast Courtney B. Vance) seems to portent imminent disaster; tangible are the signs that Ben is not as secure in his sobriety as he would have you believe; the film works wonderfully in the tension vibrating from the claustrophobic, “Burns”, Christmas domicile.

“Ben is Back’s” glory rests with Roberts and Hedges; culling from their creative, propulsive depths, sear to the nucleus, the agony of addiction and a mother’s intransigence in “never letting go.”