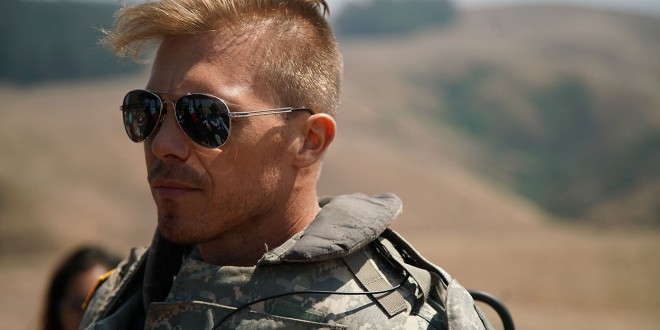 Pulverizing, thrilling from its commencement in war ravaged Afghanistan; Marshall Bennett (phenomenal, Michael Roark) a key in the U.S. Army Ranger Motorcycle Unit, injured in the line of duty, saving his partner; returning, disabled to his wife “Sophie” (lovely, feisty, Allison Paige) and father “Cal” (terrific Trace Adkins) and young son; dealing with his damaged foot, depleted financial status, realizing the greatest acuity of his youth, motorcycle racing, has been cauterized by his injury. His association with “Cyrus” (compelling performance by Ali Afshar, also a producer) leads to the rekindling of his competitive passion for motocross racing. Writer/director Alex Ranarivelo ignites unexcavated approval for this daring sport; the unequaled filmmaking of the riders, propelled rocketlike through voluminous space, is galvanizing.

“Bennett’s” War”, joyfully shines a brilliant beacon on challenged veterans and their overwhelming, inspirational recoveries; men and women, shunning the limitations of their maladies, looking within to the grit that motivates their initiative, pole vaulting them to mythic status.

This small, independent film is a gutsy tale of requited dedication; a testament to man’s remarkability in saying “no” to vicissitudes that fell the ordinary; Marshall Bennett is heroically humble with the rarity of his aptitude, leaving viewers flush with formidable awe.