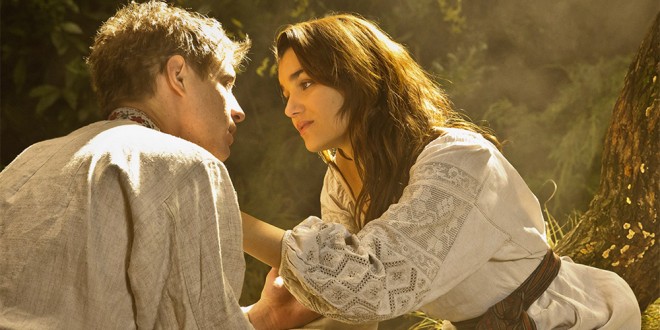 1932-33, between seven and ten million Ukrainians were systematically starved to death because they refused to be part of Josef Stalin’s collectivization; resisting forced relinquishment of their land to state- owned collective farms. “Holodomor” (death by forced starvation), cancerous as the “Holocaust”;  Stalin and Hitler, bunk-mates in Dante’s ninth circle of Hell.

“Bitter Harvest” directed by George Mendeluk tackles this worthy theme but infuses it with massive melodrama and sensationalism; a love story among the havoc, slaughter, Herculean destitution; saturated with Ukrainian folklore, mysticism, “Yuri” and “Natalka” (passably performed by Max Irons and Samantha Barks), in love since childhood; Yuri, a dreamy Communist artist, after copious wooing wins the reluctant Natalka, only to be separated by the necessity of going to Kiev to help salvage the family’s penury.

Stalin classified his murders as “famine”;  the Ukraine Parliament on November 28th, 2006 recognized the Holodomor as an act of genocide. Ultimately, in the words of Sojourner Truth, “truth is powerful and it prevails”.

Beautiful to observe, “Bitter Harvest” would have fared better and reached a broader audience if Netflix had given it mini-series status.