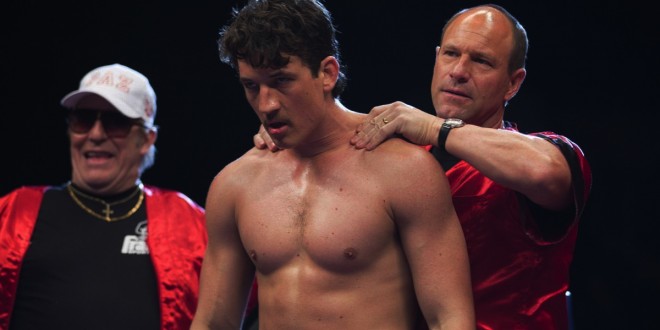 Miles Teller, contemporary champion of the “method” acting technique; stellar in “Whiplash” as a drummer, and just as viable as boxer, “The Pasmanian Devil” aka Vinnie Pazienza, the paradigm of sport’s comebacks. Director Ben Younger focuses on Vinnie’s intransigent will to fight after his neck was broken (1991) in an automobile accident; recently defeating Gilbert Dele for the World Championship in the junior middleweight class; Teller is superb at portraying Vinnie’s upper body imprisonment in a “halo”; screws are embedded in his skull, the attachment cauterizes the mobility of his head, neck for months; while restricted, he clandestinely continues to train with the aid of his trainer, Kevin Rooney (unrecognizable, pot-bellied, bald Aaron Eckhart); a miraculous triumph of mind over matter.

Ciaran Hinds, proves that from Shakespeare (“Hamlet”) to an Italian father (Angelo Pazienza) his thespian breathe is rarefied; the perfect concoction of bravado and angst lends appropriate flavor to his supporting role, as manager. Kate Sagal, Vinnie’s mother “Louise” grasps the intensity of a woman fearing for the health/success of a son whose chosen profession could kill him; her homemade altar, candles aflame, prays while listening to cheers/groans, as family members watch the fight; a woman defined by her maternal love and faith.

Whether “Bleed for This” will squeeze into the ranks of iconic boxing films (“Raging Bull”, “Somebody Up There Likes Me”, “Rocky”, “Ali”, “Cinderella Man”) is yet to be determined, but with the recent “Hands of Stone” (2016), biopic of Roberto Duran (Vinnie and Roberto meet glove-to-glove), deserve to be experienced; iron wills, courage to persevere when you are “out for the count”. In the words of Vince Lombardi, Jr. “the difference between a successful person and others is not the lack of strength, lack of knowledge but rather a lack of will.” Vinnie Paz, with Herculean courage, conquers the odds, and soars.