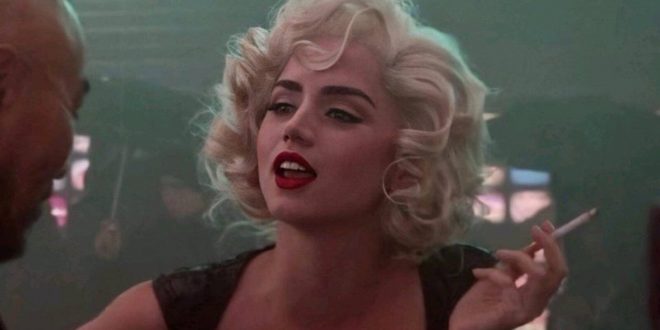 Tragically titillating expose on the minimal life of Marilyn Monroe (Norma Jean Mortenson, (1926-1962) directed by Andrew Dominik based on Joyce Carol Oats 2000 fictionalized version of her doomed ephemerality. Unfortunately, there are no surprising insights, just predictable salaciousness: a menage trois (Edward G. Robinson Jr. (Evan Williams) and Charlie Chaplin, Jr. (Xavier Samuel); an abusive thug, Jo DiMaggio (Bobby Cannavale), wimpy, depthless Arthur Miller (Adrien Brody); an egregious, prurient, lewd scene with JFK was beyond tasteless and unnecessary. And Marilyn? Played with prescient, DID (dissociative identity disorder) by Ana de Armas; she goos and coos with prodigious mimicry Marilyn’s epochal, classically filmic,  iconography; off the screen she is a delusional, vulnerable sex object, looking for an unknown, unaccounted for father; sickeningly, she refers to anyone she dates, sleeps with, or marries “Daddy”; a woman of intelligence, she allows the “dumb blond” scenario to propagate; “Blonde” sadly, refuses to address Marilyn’s worthiness beyond the sexual; her value lies in her body and its expectancy; she is perpetually differentiating between “Norma” and “Marilyn” and fails sensationally.

Throughout the too lengthy, meandering plot I kept comparing Marilyn to Diana; both “discovered” at tender ages, negotiating worlds of manufactured rules, mismatched lovers, but universally worshiped for their attributes; both died cataclysmically at thirty-six. Diana rose above her circumstances while Marilyn wallowed and succumbed to hers; both remain, and will continue as icons of twentieth century culture, femininity and in Marilyn’s legacy the quintessential, sexual symbol.

2022-09-30
Peneflix Admin
Share !
Previous: MOVIES WORTH SEEING IN THE THEATRE
Next: HOLLYWOOD VS BOLLYWOOD (IN THEATRES)