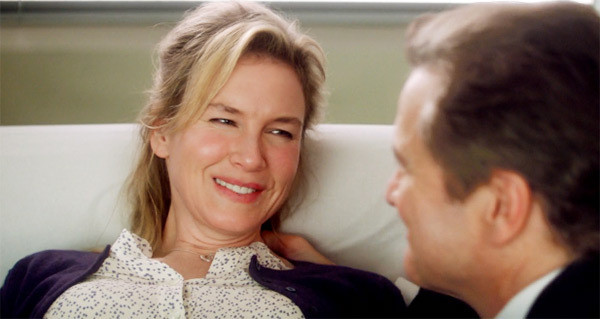 “Bridget Jones” is a brand with Renee Zellweger as its face. For fifteen years we’ve listened and watched as she unsuccessfully navigates her loves, life and decision-making process. We’ve all known the “Bridget’s” of the world: they arrive at the airport without their tickets; show up a day late for lunch, or forget altogether; never remember a birthday, but we keep them in our lives, why? Because with all their flakiness, mercurial behavior, they perpetually enchant; their lack of duplicity,  guile and genuine goodness makes them precious commodities, to keep, nurture and cherish. Such is our attachment to Bridget Jones.

She’s forty-three, pregnant, and in her own inimitable style, unsure of the father; either her oldest flame, “Mr. Darcy” (depicted with seasoned aplomb by Colin Firth) or new “one night stand”, scruffily good looking “Jack” (Patrick Dempsey, a refreshing, genuine addition); with usual predictability the scenario careens between the two men, both stunned and happy to be prospective fathers; and Bridget’s angst as she vacillates between an ancient crush and a contemporary Lothario. Gentle, satisfying humor infuses the comings and goings of the three protagonists.

Emma Thompson is a beacon of levity as Bridget’s gynecologist; her professionalism slips as she realizes the incongruity of the situation.