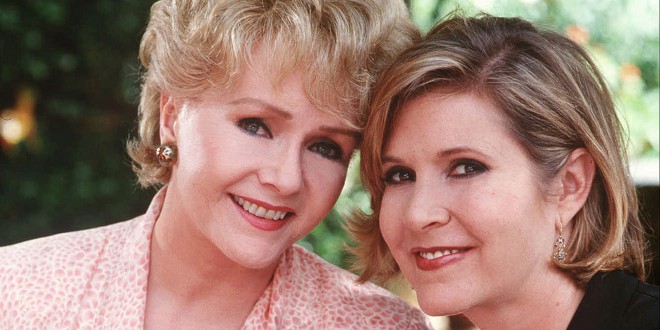 Watching directors Fisher Stevens and Alexis Bloom’s intimate documentary on the relationship between the legendary actors Debbie Reynolds and her daughter Carrie Fisher, I soulfully regretted not seeing it while it toured the Festival circuit; with their passing I found it profoundly tragic and painfully pathetic.

Debbie Reynolds had her day in the sun, as did Carrie Fisher; why wasn’t it enough to go gracefully into that good night? Debbie, ageing and aching, continued to perform well past her eightieth birthday, while Carrie perpetually polished her mother’s halcyon halo; living next door to each other created a bond that took years to forge. Carrie had bested her demons (drug and alcohol abuse) exercised her literary expertise (“Wishful Drinking”, “Postcards From the Edge”) but still frozen as nineteen-year-old “Princess Leia”. Watching a fifty plus woman signing autographs on forty-year-old “Star Wars” posters is woefully sad.

Archival footage of their gilded childhood (Todd, Carrie’s younger brother, now pudgy, grubby, surrounded with memorabilia), today, living off the the vestiges of their renown heritage (footage of a dying Eddie Fisher should have been cauterized), questioning how their lives would have evolved without the monumental media spotlight. There is honesty in this documentary.

In conclusion “Bright Lights” (which realistically had dimmed eons ago) is an example of clinging relentlessly to the days of “wine and roses”.