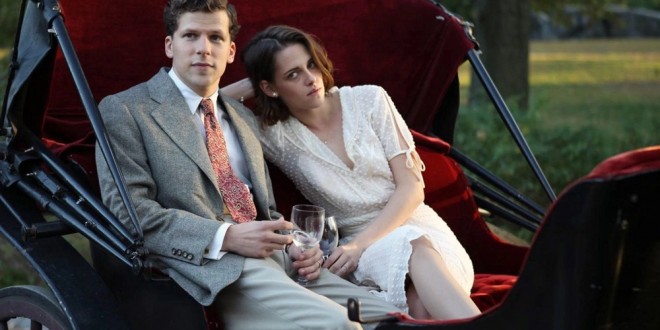 Bobby instantaneously succumbs to the charms of his uncle’s secretary “Vonnie” (Kristen Stewart’s subtle and profound performance lends credibility to a “lovely to look at” but flimsy scenario); she and Eisenberg have a sufficient modicum of chemistry to pique the viewers attention. “The course of true love never does run smooth” and Bobby’s second romantic interest is serendipitously, “Veronica” number 2 (Blake Lively,  stuck in the ageless world of “Adaline”, bland, beautiful, boring), but one’s first love is never excised from one’s heart.

Nostalgia permeates every scene: smoking without impunity, drinking ambitiously, consciously awaiting the next gratuitous party, life’s immutable, haunting decisions; “Café Society” is a delicious canapé, flashback to what once was, now,  for better or worse “gone with the wind’.