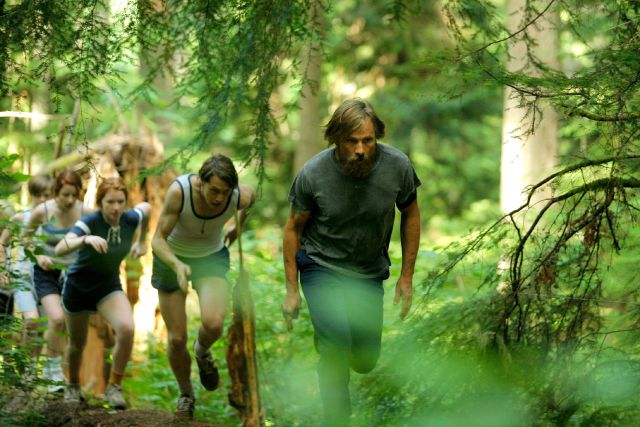 Viggo Mortensen has practiced incredible discretion when selecting his filmic personages, from “Lord of the Rings”, “History of Violence”, “The Road”, iconic “Eastern Promises”; his characters are strong, strange and silent, marinated in intelligence, often inscrutable, always fascinating.

As “Ben” in “Captain Fantastic” he is at his enigmatic best,  the father of six, living off the grid in a forest in the Pacific Northwest; they hunt, forage, study,  live and survive solely by their wits, intuitions, and mettle. At the commencing scene, gorgeously filmed, we watch the balletic movements of a deer fleeing imminent danger; Ben’s eldest son “Bo” (sensitive George MacKay) slays and guts the “kill” as a right of passage, he is 18 years old. The children (stunning, insightful performances by each actor) are universally brilliant; proficient in six languages, know the constitution and its amendments; they sing, spout poetry, voraciously devour literature well beyond the norm. The conundrum arises when they must attend a funeral, in the civilized world, where they are ill- equipped to merge with citizens immersed, informed by the technological tools, conveniences, niceties of the twenty-first century.

Without filters, lacking boundaries, tactless, they are anomalies, unfit, unprepared to accept, and unaccepted by their mundane, average relatives.Frank Langella is marvelously efficacious as a wealthy grandfather willing to raise the unrefined brood, aiding their adaptation, initiation into a world where individuals must understand and respect others, without judgment or guile.

Writer/director Matt Ross took to the extreme Henry David Thoreau’s philosophy of “living deep and sucking all the marrow out of life”; but showers inimitable wisdom, also quoting Thoreau,  knowing, “the price of anything is the amount of life you exchange for it.” There are lessons for all in “Captain Fantastic”.