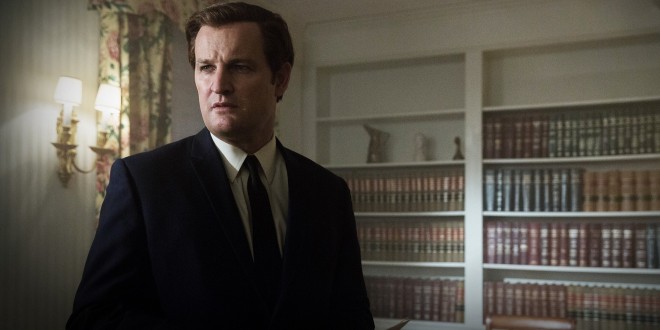 This is not a good film; it binges on “poetic license”, sensationally portraying Senator Edward Kennedy (1932-2009) as a moronic megalomaniac; July 18, 1969, sounded the death knoll for Kennedy’s quest for the Presidency but did not destroy the aura of royalty, entitlement that informs his birthright; Kennedy remained senator of Massachusetts until his death. Regardless of his achievements, the drowning of Mary Jo Kopechne and his subsequent behavior cast an ugly blemish on his reputation that remains to this day, nine years after his passing.

There is little to praise in “Chappaquiddick”: Jason Clark, as “Ted” seems deservedly uncomfortable in the role; indecisive, immature, self-absorbed, lacking Kennedy charisma, bounces from whining to belligerence; maybe it was shock, most likely fear, that led to his decisions; Kate Mara is passable as the doomed Mary Jo, but director John Curran, subjecting viewers to her slow demise, even last minute prayers, would have been considered egregious speculation in a court of law; Ed Helms, Joe Gargan, Kennedy’s cousin, vacillates from sycophancy to outrage as the fiasco continues; Bruce Dern as the paralyzed Joseph P. Kennedy treats his son as unworthy of the Kennedy Kingdom.

I agree with Neal Gabler (biographer of Edward Kennedy) that “Chappaquiddick”, “instead of excavating Kennedy for larger artistic aims, it eviscerates him for narrow voyeuristic ones.”

But on that festive, fateful evening, July 18, 1969, on the island of Chappaquiddick, celebrating Robert Kennedy’s campaign workers, Ted Kennedy and Mary Jo Kopechne left the party, went off a bridge, Kennedy survived, sought help from his political cronies, did not call the authorities, waited over nine hours to report leaving the scene of the accident;  empirical evidence, all else, subjective, pejorative.