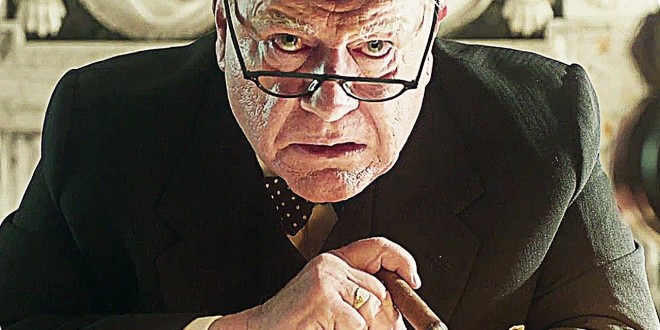 If you had never heard of the brilliant statesman Winston Churchill (1874-1965) you’d be hard pressed to reason why this lugubrious film was ever conceived or created; director Jonathan Teplitzky’s biopic is a dull, plodding scenario focusing on the darkest hours of Britain’s Prime Minister, at the conclusion of WWII  (aka D-Day); Brian Cox depicts Churchill as a bilious, cigar and scotch infused curmudgeon; he is depressed, cantankerous and mean, totally out of sink with General Dwight Eisenhower (John Slattery) and General Bernard Montgomery (Julian Wadham), whose strategies Churchill railed against; more buffoon than visionary he wallows in self pity, recognizing his alienation from the decision making process, a bane that is barely tolerated. His marriage is compromised; Clementine (1885-1977) (Miranda Richardson) serves as Cerberus, a watchdog patrolling, controlling his maniacal outbursts.