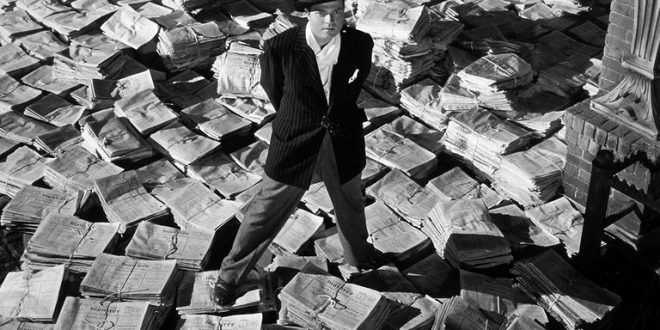 My nascent exposure, in the mid 1980’s, to Orson Welles’ Homeric epic, “Citizen Kane” did not resonate as an iconic, monumental film destined, for archival prominence; almost forty years hence, with a matured aptitude, my sensitivities now grant it the lionization it has always deserved and for the most part received. Viewing “Mank” (previously reviewed) and knowing the war of words and authorship that perpetually suffused the relationship between Orson Welles (1915-1985) and Herman Mankiewicz (1897-1953) spinning around the Academy Award winning screenplay of legendary “Citizen Kane”, the second viewing and the gift of hindsight were tastily intriguing. Both men had egos the size of Michigan Stadium, imbued with staggering intelligence they never suffered fools or each other; Mankiewicz’s seniority, not only did not intimidate Welles, it fueled his elitism. Books have inflated the controversy; film critic Pauline Kael’s “Raising Kane” is categorically in Mank’s camp, rivaled by Peter Bogdanovich’s (a friend of Welles) “The Kane Mutiny” adding titillation to the controversial conflagration. Whether one or both (I feel there is a nasty blend of the two) the screenplay is dynamic, ribald, brilliant and Welles owns “Charles Foster Kane”; his portrayal of the megalomaniac, newspaper czar, erupts from the screen with its pungency, urgency, pain and enormous lust, lust for power, possessions, and women; Welles excels as a man “if he hadn’t been so wealthy, might have been really great”; Kane proclaims he “always gagged on that silver spoon”; ironically, intentionally consumerism fails to enhance, only aimlessly, sorrowfully emphasizes his isolation, inability to purchase, the unsellable, joy. His last word haunting the entire film, surrounded by splendor, ancient statuary; reminiscent of Shelley’s poem: “My name is Ozymandias, King of Kings, Look on my works, ye Mighty and despair!”, “Rosebud” shares the fate of all tangibles, regardless of value,  ephemerality.