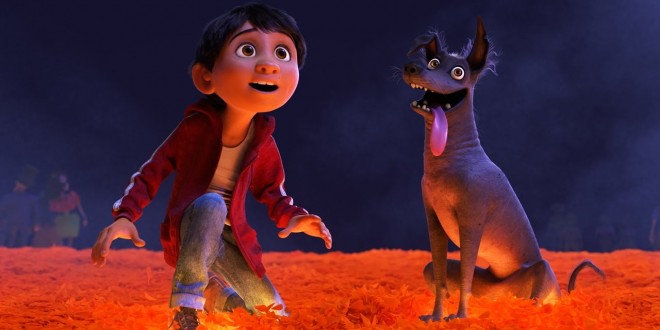 Dia de los Muertos (The Day of the Dead) is a Mexican holiday celebrated between All Saints Eve, All Saints Day and All Souls Day,  October 31st-November 2nd every year; “ofrendas” (altars) take center stage, with photos of the deceased; laden with food, flowers and mementos, the dead spirits cross over into the land of the living; it is a time of gaiety, revelry and music. But in twelve-year-old Miguel’s home music is forbidden; his great, great-grandfather, a traveling musician, disappeared long ago, leaving his wife and baby daughter “Coco”. “Miguel”, (Anthony Gonzalez) not meant to follow in the family shoemaking business, loves the songs of legendary “Ernesto de la Cruz”, (Benjamin Bratt), in an attempt to steal the iconic songster’s guitar, he finds himself floundering in the spirit universe, seeking Ernesto’s blessing, authorizing his reentry into the world of reality.

“Coco” a Pixar jewel, directed by Lee Unkrich and Adrian Molina is spellbinding; a blazing, kaleidoscopic adventure into a maze of color, intrigue, self-awareness and discovery. Brilliantly addressing a young boy’s passionate dream, disillusionment, enlightenment. Befriended by “Hector” (Gael Garcia Bernal) whose light is dimming because he is not featured on an ofrenda; doomed to anonymity, desperately, achingly, yearning to be remembered; he is the most marvelous creation, a metaphor for memory, honor and retribution.

The legitimacy of “Coco” lies in its massive appeal to all audiences, regardless of demographics, gender, ethnicity; themes of loyalty, vengeance, plagiarism, trust, imbue complexity and depth to the scenario;  we’ve heard the adage “looks can be deceiving”, here it is radiantly, remarkably, refreshingly authenticated.