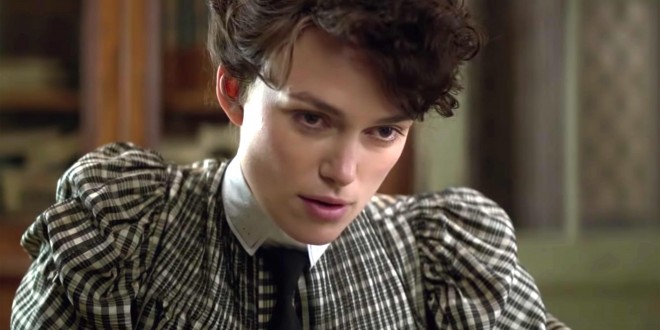 “Colette” finely directed by Wash Westmorland, reminiscent of “The Wife” is the true story of Sidonie- Gabrielle Colette (1873-1954) a revolutionary, sensationally avant-garde, depicted magnificently by Keira Knightly; at thirty-three, comfortably wallowing at the pinnacle of her seasoned career, she infuses “Gabby” with the naivety of a teenager, ardently in love, as only a teenager can be, with Henry Gauthier-Villars, a caddishly charming, oily bon vivant, critic, fashionably known as “Willy”; Dominic West is formidable in his unctuous, fawning characterization of an amoral, but lovable man. After their marriage, his minimal talent shriveled, she germinates as his ghostwriter, thriving with her awakened potential; the fountain of his rejuvenation with published “Colette”, a huge bestseller, pole vaulting him to the literary summit of France. Her commodification grows exponentially as their debts increase and his avaricious, gluttonous quest for material gratification and fame, imprisons her talent, sacrificed for his glory and self-aggrandizement.

Free-spirited and generations ahead of her contemporaries she doffs ‘Willy” and his wildish whims, engages in same-sex relationships, most notably, “Missy” (magical Denise Gough), embraces the stage and writes over fifty novels and short stories, including “Gigi” and “Cheri”; she was a literary force, hedonistic, titillating to the point of astonishment in early twentieth-century milieu, a forerunner of E.L. James’s, 50 Shades trilogy.

Beautifully filmed, a testament to the ferocious commitment to being oneself, unshackled by conventions and “doing foolish things….with enthusiasm.”