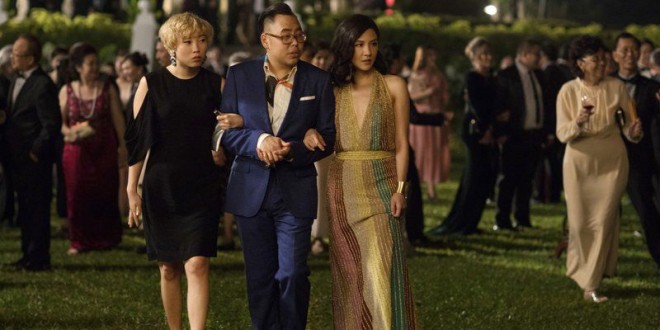 Why is this film joyous and “Generation Wealth” lugubrious? Both films feature those whose religion is consumerism, worshiping “stuff”, “labels” measuring, defining one’s persona. Director Jon M. Chu’s “Crazy Rich Asians” (based on Kevin Kwans’s 2013 novel) is just as laden with overblown, excessive guzzling of commodities; the difference is style: gratuitous, glamorous grace, abundantly jeweled, cocooned in couture,  the accouterments are worn by women and men with pristine elegance, the shoe does fit! Also, there is a keen balance, Chu’s focus on massive, legitimate largess, contrasted with scholarly, dignified success; validity exercised in both categories. Unlike the nonfictional protagonists in “Generation Wealth”, these “crazy, rich Asians” stun with charismatic, camera-worthy actors: Constance Wu, “Rachel”, an economics professor, dazzles as “Nick’s” (lusciously dreamy Henry Golding), girlfriend; he is heir to a mega real estate fortune, headquartered in Singapore. Singapore’s astounding beauty and culturally iconic markets and vistas provide a sensational background for the melodramatic scenario.

Nick and Rachel travel to Singapore for a wedding and an introduction to his family: Michelle Yeoh as “Eleanor”, Nick’s mother is riveting; everything about her reeks of strength, power; frozen, resolute paragon of matriarchal domination; she values family above all else and went through the fires to earn and keep her position; Rachel with the aid of her childhood friend “Goh Peik” (quirky, hilarious Awkwafina), rises above petty rivalries and jealousy to match Eleanor’s resolve. Their scenes together are the backbone and sinews of the film.

Chu, not always subtle, excavates the heart of family dynamics, a distillation of priorities, loyalties; how deep is the debt owed to one’s parents?  “Crazy Rich Asians” is a glamorous, gooey conglomeration of whimsey, morality, exquisiteness and unmitigated jubilation.