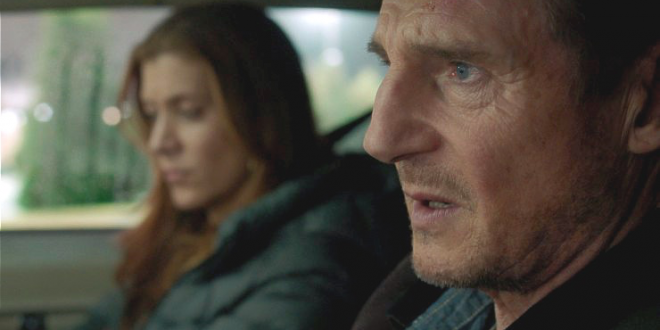 Liam Neeson, softens his edges in, by far, the quirkiest love story of the current century; as the “in and out” bank bandit “Tom Cooper” he has slithered from one institution to another, undetected, accumulating millions, housed at a storage facility; an instant sighting proves fatal, he succumbs to the scintillating magnetism of “Annie” (Kate Walsh) manager of the warehouse, and unaware of the illegitimate stockpile; thus his epiphany commences, confessing to the FBI, desiring, in lieu of the returned plunder, a reduced sentence and a “happily ever after” fate with his muse.

“Honest Thief” unveils the Neeson we know and expect; Tom is a demolition expert proving his skills are current,  dealing with untoward FBI negotiators; of particular interest is Jai Courtney as nefarious “John Nivens”, a greedy agent willing to murder at whim to garnish the spoils of Tom’s expeditions.

Comforting was the fact that a live audience (of at least 20) was mesmerized by the chase scenes, corny conversation; nary a hint of the raging pandemic, hovering beyond the sequestered confines of the theatre.

Directors Justin Benson and Aaron Moorhead concoct a scenario about an initially devastating hallucinogenic; properly ingested can be timed to go back, retrace and relive one’s history; in retrospect I wish I had a whiff of it before experiencing “Synchronic”; actors Anthony Mackie and Jamie Dornan, playing paramedics scooping up the human detritus resulting from swallowing the mind-altering pill; vastly conflicted with their own personal angst, incapable of rising from the mire of their own creation.

Synchronic from the Greek meaning, “time”, “considers a language at a moment in time without taking its history into account”, obtuse? My engagement waned after twenty minutes, realizing the drug was for losers, stymied and needing a false reality to cope with life’s vicissitudes.