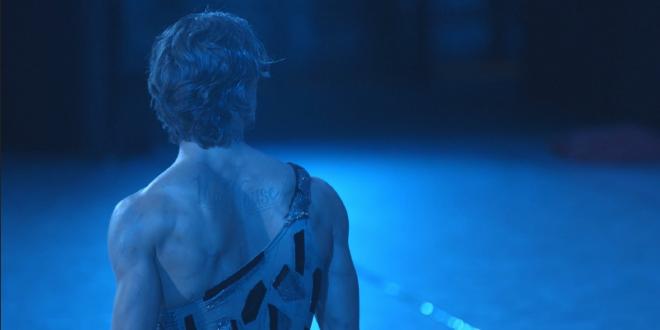 DANCER (ON DEMAND & IN THEATRES)

More often than not, first run movies On Demand are at best anemic or at worst, in need of life support. But “Dancer” is a glorious exception.  A spell-binding documentary about the Royal Ballet’s “Bad Boy”, Ukrainian Sergei Polunin; a magnificent prodigy whose promise was apparent at birth (November 20th, 1989); his muscular liquidity so stellar, amazingly atypical, was recorded from the age of three; Sergei, a joyous, gifted sprite, with a sculpted, blue-eyed countenance, envied by the gods, is stunningly documented by director Steven Cantor.

Sergei’s flight to fame was accelerated to the extent that it obliterated his childhood; at 19 he was the youngest principal at London’s Royal Ballet; naturally with a rise so precipitously breath-defying, fissures manifested themselves, resulting in excessive tattooing, stimulants, alcohol fueling his performances; at the core of his emotional breakage is his family, primarily his mother, Galina. Recognizing Sergei’s physical proficiency, she capitalized on doing everything in her power to assure her son a future beyond what she or her family ever experienced or dreamed possible; Vladimir, Sergei’s father left the Ukraine for a better job in Spain; he did not see his son for 6 years. Monumental familial sacrifices stimulated Sergei’s career but left a malnourished psyche.

Sergei Polunin’s popularity went viral when David LaChapelle’s 2015 video “Take Me to the Church” by Hozier, topped 16 million viewers; “Dancer’s” riveting, aerial, celestial Prince, more than a supernova, will continue to ignite, inspire, as long as his passion to dance burns within.