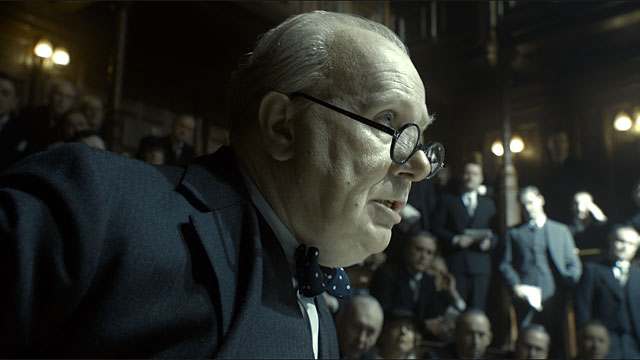 Audiences have recently been satiated with a myriad of “Winston Churchill” depictions: John Lithgow,”The Crown”, Brian Cox,”Churchill”, Michael Gambon,”Churchill’s Secret”, but not one can compete with Gary Oldman’s dazzling, intuitive interpretation of a man who changed the course of history. Director Joe Wright’s “Darkest Hour” brilliantly concentrates on Churchill’s initiation as England’s Prime Minister; it is 1940, Hitler with blitzkrieg speed has raped Western Europe, manically determined to invade and enslave England; Dunkirk is defenseless and Churchill, without political support, with remarkable ingenuity, convinces King George (sensitive, keen performance by Ben Mendelshon) and the English populace to fight against the “abyss of a new dark age”; here is filmmaking at its pinnacle.

It is Oldman who owns, blazes and soars in the “Darkest Hour”; no cliques, platitudes or phoniness seep into his characterization; Winston’s corpulent, curmudgeonly, astute tirades are vibrant and legitimate, resonating in Oldman’s every word and motion; a doppelganger of massive magnitude, an Academy Award, should be his!