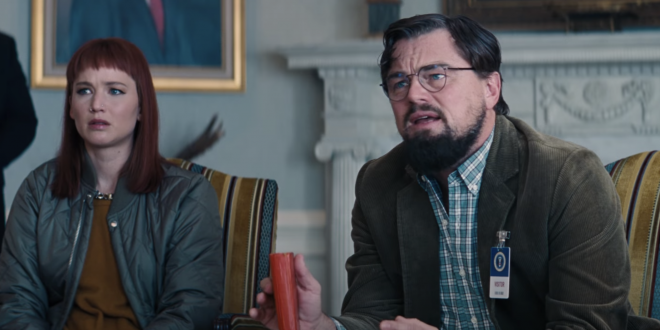 Director Adam McKay’s no-nonsense depiction of a world in flux is a masterful tale infused with truth, blatant warnings, and “what ifs”, if empirical evidence isn’t addressed. Admittedly, I am not fond of cataclysmic, apocalyptic films where the known world is obliterated, leaving ubiquitous detritus and a few unlucky members of the human race, forced to navigate its toxic parameters; never a better or healthier planet; 2011’s “Melancholia” a depressive movie focusing on the final days of an elitist, damaged family was an extravagantly boring march to the end of time; the dysfunctional principals hardly worth saving; “Don’t Look Up” fares far better; intimacy reigns, viewers are privy to the emotional immunities and liabilities of the participants, frustration abounds and McKay’s fearless message roars. Brilliant casting: Leonardo DiCaprio (inimitable performance) and Jennifer Lawrence (stuns) as scientists who see a massive comet in the direct path of planet Earth, obliteration guaranteed, they are paid no heed. Meryl Streep as the ringleted, blond, President is preposterously perfect, an idiot of magnitude, a representative of the populace; Jonah Hill as the President’s buffoonish Chief of Staff, blind to reasoning; Cate Blanchett and Tyler Perry are talk show hosts who nail the narcissist, gossip mongers, ubiquitous in today’s milieu, craving the insignificant, prurient, salacious comings and goings of tabloid stars; Mark Rylance is the big bad billionaire, whose self-aggrandizement trumps his rational.  McKay ironically and stingingly hits above and below the waist; obvious metaphors, intentionally unsubtle, score impeccably. Uncomfortable to watch, because of a myriad of accuracies, but formidable in its interpretation.