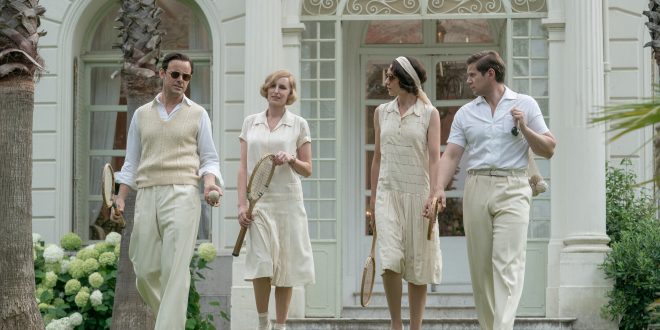 Having never visited the popular series of the inimitable Crawley family, I judge the films as entities totally without preconceived intimacy of the characters; possibly unfair, but films take precedence above and beyond the world of television (which I also admire). I found 2019’s “Downton Abbey” rather abysmal, apart from Maggie Smith as matriarch “Violet Crawley”; since her riveting Academy Award winning performance in “The Prime of Miss Jean Brodie” she has seized, without compromise, my loyalty; as a dowager, in her waning days she sears with the secrets of her enigmatic, multifaceted youth and an unexpected inheritance.

“Downton Abbey: A New Era” directed by Simon Curtis is gorgeous; its creamy, virginal landscape bespeckled with the ultimately styled, svelte performers and those assigned to serve them, is outrageously wonderful; more than a “new era” the passage of the old is poignantly navigated; death, addressed with inevitability, stroked with gentility and acceptance, is handled with aplomb and grace. It is an “era” of boundary-breaking: silence is shattered by innovative “sound” in movies; the “Abbey” in desperate need of repairs, allows a crew of filmmakers to invade its hallowed halls; Michelle Dockery, “Lady Mary Talbot” and Hugh Dancy, director “Jack Barber” are charismatically flawless.

Unaware of its intricacies I watched a corps of gifted actors portray a fading sphere, soon to be gobbled, altered by war, technology, invention; without angst, emotional bombardment “Downton Abbey: A New Era” is an exceptional depiction of a “kinder, gentler world”, never to be duplicated, relegated to a soft, hazy memory of a simpler time, “gone with the wind”.