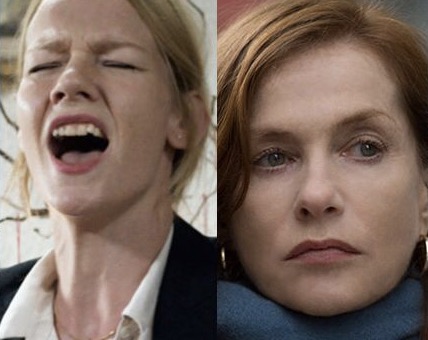 Two powerfully disturbing, provocative films centered on two twentieth-first century women, maneuvering successfully, in previously male populated arenas. “Elle” , “Michelle LeBlanc” (remarkable, brilliant Isabelle Hubert) runs a Video Game Company; she is violently raped in the first scene while her cat passively watches; she decides to discover the rapist using her own tools of detecting; shameless, empowered, her calculated, creative sleuthing slowly eliminates viable candidates; ignoring the snide antics of her male coworkers, her diligence unveils the flaws, quirkiness of the men and women in her life. Hubert imbues Elle with Herculean, scary strength; she is twisted, cruel, terrifying, maddening in her methods. She is unlikable, but admirably intimidating.

Writer/director Maren Ade’s “Toni Erdmann”aka “Winfried Conradi” (Peter Simonischek) father of major protagonist “Ines Conradi” (Sandra Huller), a successful consultant, balancing stressfully, her testosterone driven clients and boss; Toni, unabashedly, with idiocy and love invades her home and workplace in Bucharest, Romania; wearing wigs, fake teeth, he circumvents her goals and gleans the attention due solely to her. Her victimization, resulting from a capitalist environment where women are subjected to the pejorative dictates of men; she, like Elle, uses her sexuality to seek one-upmanship with her partners; satisfaction blooms with their degradation. Toni fractures Ines’s structured, abusive compliance, freeing her from an unworthy, stultifying environment; likewise, the rapist breaks Elle’s frigid composure, allowing her to seek retribution on her terms and unleashing long imprisoned emotions.

Both films are in need of editing; highly disturbing, at times repugnant to view; “Elle” and “Toni Erdmann” focus on intelligent women who despite obstacles, have succeeded; there’s a decadence, depravity that exceeds the boundaries of voyeurism (not propriety) in their behavior; titillation in self-satisfying manifestations; prurient exhibitionism, retaliation against the male gaze?

In conclusion we’re left with an emptiness, an unsatisfying vacuum, “signifying nothing”,  questioning if these two women, are beyond repair.