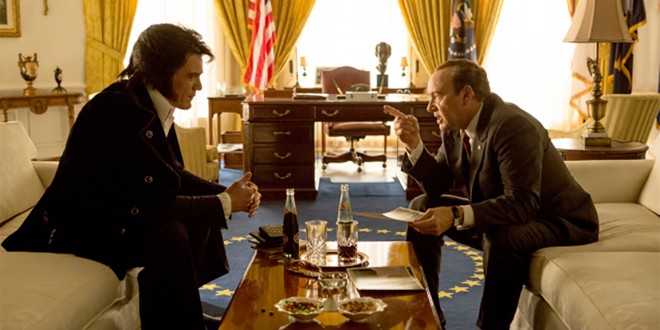 1970. Tumultuous times: massive protests about US government involvement in Cambodia and Vietnam; Kent State massacre; cyclone in Bangladesh taking a half million lives; earthquake in Peru claiming sixty-seven thousand individuals; Gamal Abdel Nasser of Egypt, dies; the break-up of the Beatles and the meeting of the “King’ Elvis Presley (1933-1977) and the President, Richard Nixon (1913-1994).

Michael Shannon (Elvis) and Kevin Spacey  (Nixon) give solid performances as two delusional men who have reached the pinnacle of success in their respective professions; the reenactment of their episodic encounter on December 21st, 1970 is marginally entertaining but hardly worthy of the 87-minute, blow by blow, at times ridiculous, ultimately pathetic meeting.

Gun-toting Presley decides that America needs him to go undercover as a Federal Agent (at large), curb the rampant growth of the drug culture and protect the populace from the likes of the Black Panthers; he strikes perfect jabs at Nixon’s paranoia; both see the world going “to hell in a hand basket”. Spacey consummately executes Nixon’s mannerisms, grimaces and verbal nuances; Shannon lacks the soft, boyish glamour of Presley, but grasps the depth of the man whose fame has crippled him emotionally and psychologically.

In the end both men were fed by sycophants, cauterizing them from reality; sadly, their demons triumphed and intrepidly led them down the road to perdition.