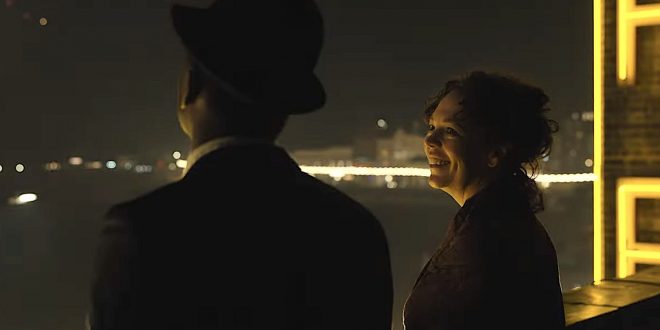 EMPIRE OF LIGHT (in theatres)

Olivia Coleman, out of 156 nominations has won 66, including an Academy Award (“The Favourite”, 2018) and three Golden Globes; this year she is again nominated for her stunning characterization of a floundering, fragile woman tenuously teetering on the thread between reality and disillusionment; treating viewers to an astounding, catastrophically heartbreaking performance; “Hilary Small”, manages the Empire Theatre on the south coast of England, 1980’s, where she is liked by her co-workers, abused by her caddish, misogynistic boss, “Mr. Ellis” (a nasty watchable Colin Firth) and falls in love with “Stephen” (marvelous Michael Ward) a young black boy confronting scurrilous, vituperative racism; there is a sterling purity, sincerity transcending naivety in their connection; solitary, aching loneliness, a painful desire to share, be included in anyone’s sphere, to be counted, understood and loved for oneself; understated wishes, oftentimes, unachievable.

Director/writer Sam Mendes observes the characters without manipulation, predictability shattered, as the human condition dictates the scenario; but its pulse is regulated by Hillary, who has never watched a movie, been comforted by its medicinal, healing attributes or the luscious escapism of celluloid; Coleman’s luminosity cannot be categorized, defined, her range is vast, never gratuitous, always blindingly authentic. This spectacular role, its keen poignancy, worthy of the highest accolades, now a treasured, memorable soul; if it were not for cinema, we would have never met.

CAVEAT: This year’s Gloden Globes pits three magnificent, compelling actors (there are five) in the Best Actress in a Drama, category: Cate Blanchett, “Tar”, Olivia Coleman, “Empire of Light”, and Michelle Williams, “The Fabelmans”. Blanchett is the likely winner, but Coleman and Williams bested her character. In the previous review of “Tar Revisited”, “My Brilliant Friend” clarified (after viewing it 5 times) my fuzziness. Eternally grateful for the “Sunshine of her Spotless Mind”.