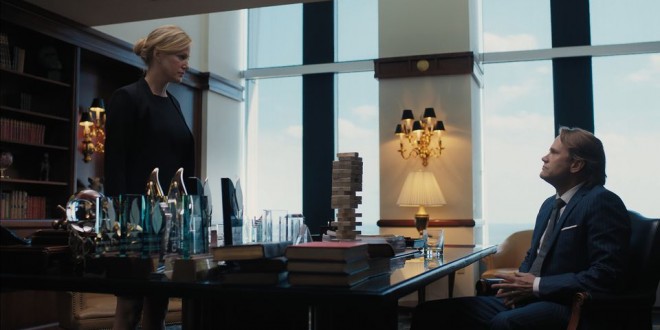 Wall Street has its share of female financiers, brokers, bankers; director Meera Menon focuses on their ambitions, struggles to best their testosterone-infused competitors; “Equity” is a reality check and a viable one.

Anna Gunn as tough, investment banker “Naomi Bishop”, nails the psyche of someone who suffers no nonsense; her meager background was the fodder for success; she has the brains, mettle and fearlessness to plow through the minutia; her due diligence is thorough and more importantly trustworthy; she plays the game “fairly” and above board….she is equitable.

Sarah Megan Thomas (a producer) as Naomi’s deputy, “Erin Manning” is terrific as a smart, purposeful, pregnant, power-hungry woman, overwhelmingly aggressive and impatient in ascending the “ladder”; her excessive initiative generates a weak link in the IPO Naomi has diligently pursued.

“Equity” substantiates that there is little difference between the genders in the zealous, cut-throat world of “Gordon Gekko”; women just look better in the pursuit.