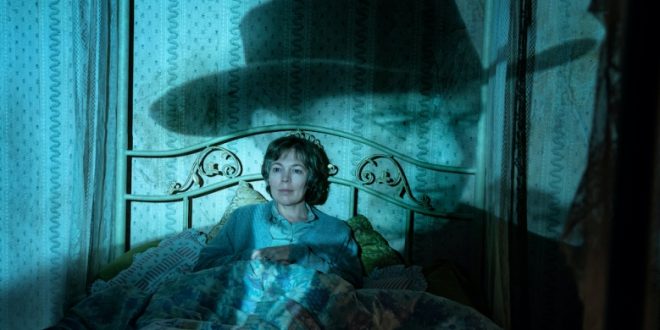 For the near future our lives will be pandemically scripted; at the bountiful mercy of the internet we can see classic, vintage, contemporary films, cemented in the confines of our domiciles. As a craver of the genre, after daily duties, I delve into the myriad of streaming choices available, my odds-on favorites: Netflix, Amazon Prime, Brit Box, Hulu, or Roku to serve all your choices. Here are a few of my recent time-consumers:

Olivia Coleman exponentially exceeds her expectations in every role she devours, from detective to queen and now murderer she astounds with her diversity and dazzling artistry. Costarring David Thewlis, they are a benign English couple, Susan and Christopher Edwards convicted of the 1998 murders of her parents in Nottinghamshire, England. The “simple” swells into unexpected complexities, demons’ surface and nothing is as it seems; acting alone, keeps one intrigued at the highest level. FOUR STARS!!!!

Leonardo DiCaprio, Russell Crowe, and Mark Strong, directed by Ridley Scott, “Body of Lies” has strongly withstood the test of time as an electrifying adventure; vying entities in the CIA questing the dynamiting of an Al-Qaeda terrorist cell in the Middle East. The chemistry between the three principals is beautifully, intelligently, and succinctly depicted by actors nearing the pinnacle of their profession.  FOUR STARS!!!

In both scenarios the protagonists have suffered tragic familial traumas; daughters, wives slaughtered for no apparent reason, triggering staggering, well-plotted revenge: Gerard Butler, (“Clyde Shelton”), crushed by a legal technicality, watches a murderer go free; eight years before “Acts of Vengance”, LAC is an engineering feat; Clyde manipulates his vigilante chaos within prison walls; the yin and yang between him and prosecutor “Nick Rice” (Jamie Foxx) provides nail-biting traction. THREE & ½ STARS!!! While Antonio Banderas, “Frank Valera” suffers a reminiscent predicament; blame for the deaths falls on his conscience; too much time is spent watching his sought-after whippings before he becomes the aggressor. TWO & ½ STARS!!!

A tantalizing detective thriller starring colossally gifted Raveena Tandon as “Kasturi Dogra”, a policewoman destined to sculpt her own stalwart reputation in a testosterone driven world; she is terrifically convincing; the eight episodes, bursting with myth, murder and madness melded magically with each titillating turn of events. FOUR STARS!!!!

2021-12-21
Peneflix Admin
Share !
Previous: NIGHTMARE ALLEY (IN THEATRES)
Next: THE TRAGEDY OF MACBETH (in theatres, soon to stream)