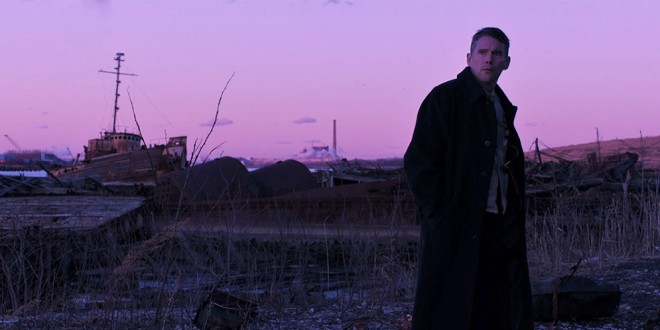 From the onset there is a barren stinginess, an aura of gloom permeating the atmosphere of this dying Dutch Reformed Church, built in the 1700’s; “Reverend Ernst Toller” (catastrophically brilliant performance by Ethan Hawke) sits in his arid office, composing a daily diary to be destroyed at years’ end; he is gaunt, robotically gives his sermons; his tiny congregation, sounding the death knoll of the church’s viability. “Mary” (Amanda Seyfried) a pregnant congregant, pleads for the Reverend to speak to her husband, “Michael” (Philip Ettinger) an environmental activist, who feels the world “is going to hell in a handbasket”; a child born today, is an egregious birthright.

The conversation between the two men is the cornerstone of writer/director Paul Schrader’s (“Taxi Driver”) examination of a godforsaken, doomed, apocalyptic future; man’s eventual annihilation of a god/man- created paradise; both men are in a state of crisis and their actions reflect the loss of hope, supreme, blackened despair where beauty, faith and love have lost their curative powers.

Unlike 2017’s “Mother” (Darren Aronofsky’s brutal, biblical allegory), Schrader treads subtlety on archival religious beliefs: Annunciation, original sin, destruction of the Temple, crucifixion, punishment for transgressions,  simultaneously flays to the core man’s honesty and hypocrisy. Enlightening is Toller’s devotion to writer, monk Thomas Merton (1915-1968) whose belief in love is “our true destiny” finding the meaning of life, cannot be accomplished alone, but with another. The puzzling, problematic conclusion of “First Reformed” can be found in Merton’s sage rationale.