Latest Reviews
Home » Hollywood » FIRST THEY KILLED MY FATHER (NETFLIX, AND IN THEATRES) 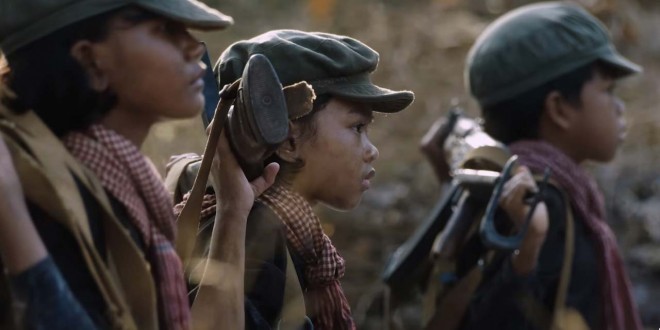 FIRST THEY KILLED MY FATHER (NETFLIX, AND IN THEATRES)

Wordlessly, empathetically filmed, is this documentary based on Loung Ung’s memoir of her torturous four years under the inhuman, communist regime of the Khmer Rouge (1975-1979); over two million Cambodian citizens lost their lives; Loung, raised in an educated,  accomplished milieu in Phnom Penh, was five-years-old when she and her entire family were systematically stripped of their dignity. “First They Killed My Father”, seen through the eyes of seven-year-old Loung is remarkable, primarily because of the performance of Shey Moch as Loung, and the inimitable directing of Angelina Jolie. Jolie’s immaculate sense of interpretation, understanding and trustworthiness culls from this little girl a profound portrait of unbelievable strength; separated from her family, trained as a soldier, planting mines throughout the countryside, her face conveys the atrocities no child should have experienced, endured. Endure she does, this is her story, the bastardization of her childhood and her miraculous survival (she and four of her siblings, reunited after the war.)

Jolie’s prescience and genius lies in her focusing on the fecund landscape, nurtured by the starving, emaciated populace; similar to Mao’s proletarian Cultural Revolution (1966-76), destroying the intelligentsia in favor of an agrarian society; a doomed, warped concept guaranteed to ultimately fail.

Jolie should be applauded for acting in, and directing projects, where others fear to tread: “A Mighty Heart” (Daniel Pearl’s kidnapping and execution by Al Qaeda) “In the Land of Milk and Honey” (Bosnia), “Beyond Borders” (Africa, Chechnya); 2012, she was appointed Special Envoy to the UN High Commissioner for Refugees; Jolie has transcended her magnificent beauty, negotiated societies “beyond” her borders, proving hers is the mightiest heart of all.