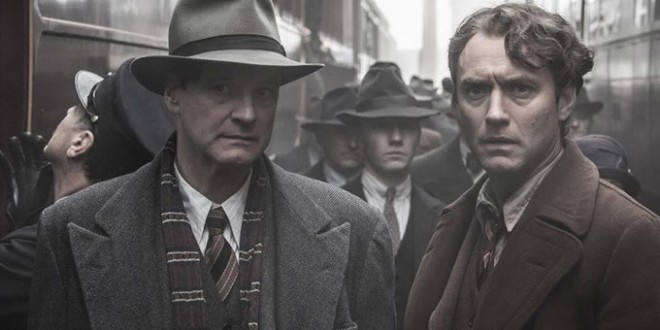 “When a great genius appears in the world you can know him by this sign: that the dunces are all in a confederacy against him.” Jonathan Swift

Thomas Wolfe (1900-1938) railed against his detractors until he was championed by Max Perkins (1884-1947), editor of Charles Schreiber’s Publishing. Max, a man whose prescience recognized and lionized writers Ernest Hemmingway, F. Scott Fitzgerald and manic, ebullient Tom Wolfe. “Genius (based on the book “Max Perkins: Editor of Genius” by A. Scott Berg; directed by Michael Grandage) concentrates on the tumultuous, traumatic, inevitably fecund relationship between these two disparate personalities. Jude Law (Wolfe) and Colin Firth (Perkins) give stunning portrayals as partners who gifted readers literature so immaculately profound that time exponentially increases its potency.

Wolfe, whose written thoughts, emotions, autobiographical sentiments gushed perpetually, without restraint; like Proust, limitless verbiage pulsated from a thousand pages; Perkins had to cut and cauterize the avalanche of creativity spewing from Wolfe’s fertile core. Resulting in iconic works: “Look Homeward Angel”, “Of Time and the River”; my beloved favorite, published posthumously in 1940, “You Can’t Go Home Again”.

“Genius” falters when focusing on Wolfe’s muse, “Aline Bernstein” (1882-1955) an unstable, irrational, jealous woman (Nicole Kidman, miscast) whose presence is more of a liability than a force.

Despite the literary, genius manifests itself in a myriad of guises: ventriloquists, funambulists, magicians; one is awed by Steve Harvey’s “Little Big Shots”, lauding prodigies in small sizes.

Us mortals must be wary of being conscripted into the “confederacy of the dunces”.

IN THE HEIGHTS (MUST SEE IN THEATRES)

LISEY’S STORY (Apple TV) & THE CONJURING, THE DEVIL MADE ME DO IT (Theatres & HBO MAX)