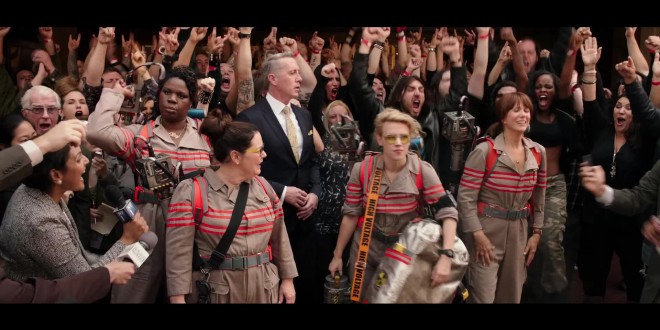 You know the expression “if it ain’t broke, don’t fix it”; as I was tormented watching this insipid female remake of the 1984 classic, questioning my discretion, I valiantly tried to unearth the entertainment value of director Paul Feig’s mission. Tremendous exertion led to the paltry, positive aspects of “Ghostbusters”:

1. Melissa McCarthy, with tremendous comedic acuity, saved the film from total, doomed annihilation; her imminent control over every character she depicts is tantamount to rarefied genius.

3. The special effects join ranks with the Marvel movies we’ve been perpetually subjected to in recent filmdom.

The monumental mistake was casting Kristen Wiig (who is always Kristen Wiig, no matter the character’s counterfeit name) as a scientist?? Yikes, with Woody Allen cadence she stutters simplifications, flirts with adolescent idiocy with “Kevin” (Chris Hemsworth’s brawn is wasted, but in retrospect they are matched perfectly.) She was abominable and should doff the ingénue role, especially when cast as an intellectual, exhibiting little or no gray matter between the ears.

Sadly, Dan Aykroyd (starred in the original) lent his name to this production, a pallid, wan imitation of the original, lacking luster, luminosity, lyricism; just a lugubrious reminder of what once was.