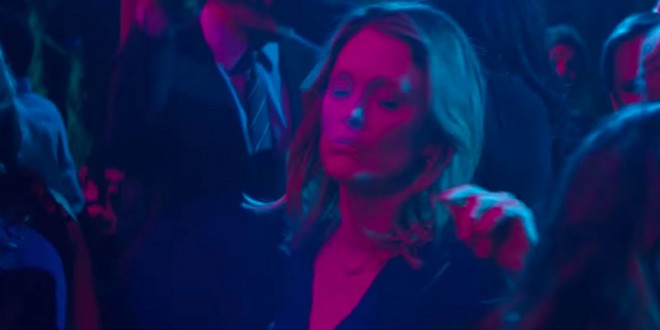 Instantly recognizable, is a woman, searching for an anchor, a “place in the sun”, with pulsating vulnerability, candid openness, she maneuvers the dance floor of a familiar night club; dancing flays the ordinariness of her life: unattached children, valueless job, psychotic neighbor; she possesses the capacity for incalculable love, but no one worthy of its measures; a divorcee, neither gay nor gloomy; Julianne Moore is incandescent as “Gloria Bell”.

On one of her marvelous movement evenings, she connects with another lonely, misfit “Arnold” (John Turturro, perfectly seasoned); divorced for a year but still painfully, physically, psychologically tethered to his ex-wife and daughters; he’s had gastric bypass surgery, the loss of girth should have led to minimalizing his responsibilities as a father to adult children, but only exacerbates his parental role; causing a conflicted relationship with Gloria and her mostly mundane, pleasantly normal family.

Found myself counting the seconds, lustily anticipating the feverish dance and song, sung by Laura Branigan; “Gloria’s” lyrics speak to a person on the verge of drowning, viability evaporating, lost in phony anticipation; stop listening to “all the voices in your head” castrate catastrophe, grab life by the fistfuls and live, gloriously!