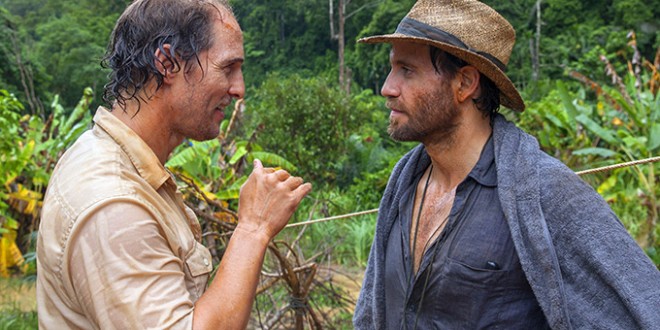 Recently there have been a number of films where the pungency of the actor transcends the legitimacy of the scenario: Michael Keaton, “The Founder”, Natalie Portman, “Jackie”, Annette Benning, “Twentieth Century Women”. “Gold” is owned by Matthew McConaughey, he has honed his skill as the sleazy, lovable rogue; no matter his foibles you subconsciously root for him and perpetually forgive his misdeeds; he soars as quasi-nonfictional Kenny Wells (Walsh), saturated with smoke and whiskey, potbellied, greasy, minimally-haired scalp, a mining maven, with stratospheric dreams of discovering the mother lode; his vision and enthusiasm magnetically attract investors when his dream is actualized with the aid of enigmatic geologist, Mike Acosta (superlative, muted depiction by Edgar Rodriguez); they discover gold in Indonesia, 1988.

Indonesia’s luscious, lyrical landscape adds visual intrigue to “Gold”; but the film fails to realize the remarkable potential simmering beneath the surface. McConaughey and Gaghan narrow the chasm between star and story but nonetheless render, instead of greatness, a slick, entertaining facsimile of “fools gold”.