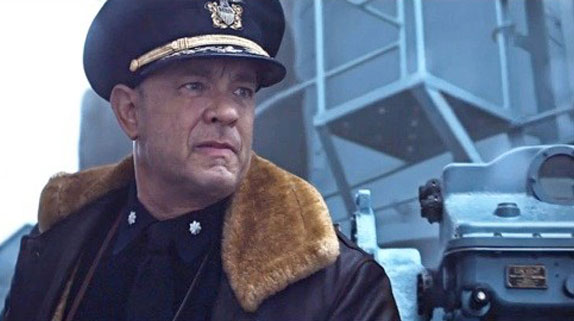 Of the countless films, programming, entertaining options viewed over the last five Covid months, “Greyhound” suffered pivotally from the pandemic; reminiscent of Christopher Nolan’s 2017’s “Dunkirk”, its magnificence needed the vastness of a cinematographic experience, instead of the confinement (regardless of the screen size) of an in-house exploitation; Tom Hanks exponentially, through the years, has matured as an actor and a screenwriter (adapting the screenplay from C.S. Forester’s “The Good Shepherd”), invested a huge chunk of his soul in depicting, fictional, U.S. Navy Commander Ernest Krause who lead an Allied convoy across the Atlantic, in what was historically, the longest most tangled battle in navel antiquity; Krause, captains the USS Keeling, (code named Greyhound; the original sunk by German Junkers in 1941) through the troubled, Nazi U-boat infestation of the Atlantic Ocean in 1942; Hanks commands the film, other roles insignificant, trivial, dwarfed by his domination; the religiosity, a touch overbearing, but not championing, his desire/mission to succeed, infuses and gifts dignity in his civility towards his men.

Movies were invented to separate viewers from the known, incarcerate them in darkened arenas; educate, distract, pulverize inhibitions, unlatch what’s lurking, hibernating, suffocating in minds in need of the electrifying faculty of film; “Greyhound” is a reminder of what’s gone missing in this devastating, forever altered, era.