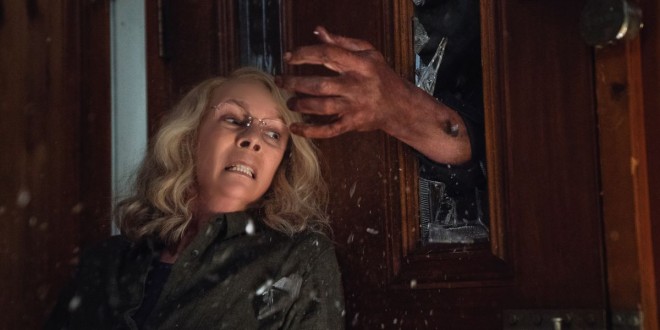 In preparation for, hopefully, the final version, of forty-year-old franchise, “Halloween” I watched the original, created in 1978; at the time I thought it was the most terrifying film I had ever seen; the frightful flavor, sans some of its redolence, is still there; with hindsight, its fascination lies, in its lack of technological effects; no seat belts, no cell phones, no CCTV’s, just women, stalked by the devil. Glowingly youthful, nineteen-year-old Jamie Lee Curtis in her film debut; “Laurie Strode” intelligent, virginal, babysitter who escapes “Michael Myers”, slash and slay rampage on a nightmarish October thirty-first. The difference in the young and aged Laurie is enormous, gone is the lustrous elasticity of a natural bob, replaced by a dyed, brittle perm; slaughtered innocence on a plane of barbarity, she is wizened, calculating, isolated in a lair designed to trap, a now sixty-one-year-old, mute maniac. Machiavellian in her quest, estranged from her daughter “Karen” (Judy Greer) and granddaughter “Allyson” (Andi Matichak) she is prepared and has prayed for a vengeful showdown; director David Gordon Green aims to satisfy.

I would have preferred a more complicated, not so compulsively committed, Laurie; a woman of substance whose innate intelligence, denies a life informed by one horrendous night; possibly unrealistic, but what fills the void if success is requited? There has to be a medium between the Lisbeth Salander’s (Dragon Tattoo) and Black Mamba’s (Kill Bill); Laurie’s mission cements her in a dimensionless universe.